I started suggesting this band to the Lowell Summer Music Series since the first time I saw them, and they finally have been booked! The Lone Bellow will be making their first appearance at the Series on Friday, August 12th!

“Then Came the Morning, the second album by the Southern-born, Brooklyn-based indie-folk trio The Lone Bellow, opens with a crest of churchly piano, a patter of drums, and a fanfare of voices harmonizing like a sunrise. It’s a powerful introduction, enormous and overwhelming, as Zach Williams, Brian Elmquist, and Kanene Pipkin testify mightily to life’s great struggles and joys, heralding the morning that dispels the dark night: “Then came the morning! It was bright, like the light that you kept from your smile!” Working with producer Aaron Dessner of the National, The Lone Bellow has created a sound that mixes folk sincerity, gospel fervor, even heavy metal thunder, but the heart of the band is harmony: three voices united in a lone bellow. 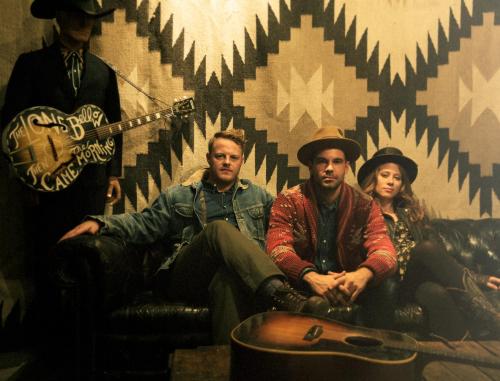 “The feeling I get singing with Zach and Brian is completely natural and wholly electrifying,” says Kanene. “Our voices feel like they were made to sing together.

“These are true stories,” says Brian. “These aren’t things we made up. We tried to write some songs that had nothing to do with our personal stories, but we just didn’t respond to them. But we’re best buds, so we know each others’ personal stuff and trust each other to figure out what needs to be said and how to say it.” Case in point: Brian wrote “Call to War” about his own struggles during his twenties, but gave the song to Kanene to sing. “The content is painful and brutal,” she says, “but the imagery, the vocals, they build something delicate and ethereal. That kind of contrast illuminates the true beauty and power of a song.”

Says Brian, “We do this one thing together, and we carry each other. Hopefully that makes the listener want to be a part of it. It becomes a communal thing, which means that there’s never a sad song to sing. It’s more a celebration of the light and the dark.” ”

Tickets for The Lone Bellow show are priced at $32 in advance (fee-free!), $35 on the day of the show (if available) and children 12 and under are always free courtesy of Eastern Bank. There are also premium seats – beach chairs are provided by the Series – set in two rows directly in front of the stage for $132. Tickets go on sale at 9 a.m. on Wednesday, March 23rd through Lowell Summer Music Series.