A band I have seen only once but thoroughly enjoyed, The English Beat, is coming to the Lowell Summer Music Series. They will appear at Boarding House Park on Saturday, August 10th! Tickets go on sale today!

“The English Beat is a band with an energetic mix of musical styles and a sound like no other, which has allowed it to endure for nearly three decades and appeal to fans, young and old, all over the world.

“When The English Beat (known simply as The Beat in their native England) rushed on to the music scene in 1979, it was a time of massive social and political unrest and economic and musical upheaval. This set the stage for a period of unbridled musical creativity, and thanks in large part to the Punk movement and it’s DIY approach to making music, artists like The Beat were able to speak out and speak their mind on the news of the day, as in “Stand Down Margaret”, things that mattered to them and the youth culture, as in “Get A Job”, and universal matters of the heart and soul, as in their classic hits “I Confess,” “Save It For Later” and “Mirror In The Bathroom.”

“The original band consisted of singer-songwriter Dave Wakeling on vocals and guitar, Andy Cox on guitar, David Steele on bass, and Everett Morton on drums – later additions Ranking Roger (toasting) and foundational First Wave Ska legend Saxa (saxophone) completed the outfit. The band crossed over fluidly between soul, reggae, pop and punk, and from these disparate pieces they created an infectious dance rhythm. 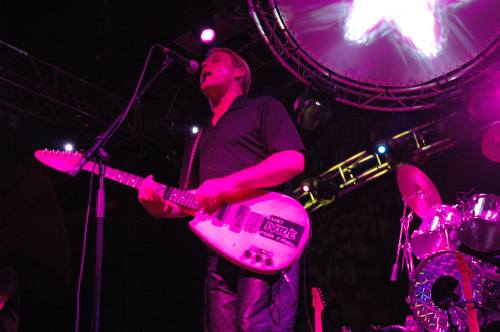 “The Beat first came to prominence as founding members of the British Two Tone Ska movement, with their classic first album “Just Can’t Stop It” fitting squarely in that genre.  Along with their contemporaries The Specials, The Selecter, and Madness, the band became an overnight sensation and one of the most popular and influential bands of that movement.

“However, band leader Dave Wakeling never felt constrained by the movement.  Dave has always viewed ska as a springboard, not a straight jacket.  Indeed, the band’s sound continued to evolve over their first three studio albums, through the General Public era (a band formed by Dave with Ranking Roger, the toaster from The Beat) — its best known song in the US was “Tenderness” — and has continued its evolution with their 2016 English Beat album Here We Go Love, the band’s first new album since 1982’s Special Beat Service.

“Consummate showman that he is, Dave Wakeling has continued to keep The Beat alive and strong. Dave continues to tour the world as The English Beat with an amazing all-star ska backing band playing all the hits of The English Beat and General Public.

Tickets for The English Beat show are priced at $42 in advance (fee-free!). There are also premium seats – beach chairs are provided by the Series – set in two rows directly in front of the stage for $142. Tickets for this show go on sale on Friday, March 1st at 10 a.m. through Lowell Summer Music Series.