Classic Albums Live is returning for the fourth time to the Lowell Summer Music Series to do Queen’s A Night at the Opera! I only saw one of their previous shows (Abbey Road) but since this is the year of Queen, I am making sure I do not miss this show!

“Founded in 2003 by Craig Martin, Classic Albums Live takes the greatest albums and recreates them live on stage – note for note, cut for cut, using the best musicians. “Think of it as a recital,” says Martin, “these albums are historic and stand the test of time.” Forgoing costumes and impersonations, Classic Albums Live has found success in concentrating solely on the music. “We don’t dress up or wear any sort of costume. We just stand there and play. All of our energy is put into the music. We want the performance to sound exactly like the album,” says Martin. 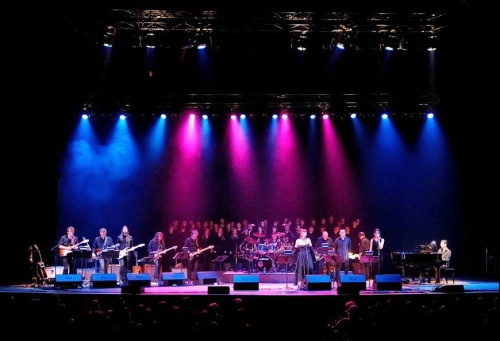 “”We created something that endures and connects. These albums are sacred to people. We deliver exactly what we promote – ‘note for note, cut for cut’ accuracy.”

“Queen’s “A Night At The Opera” was a game changer for rock’n’roll. If you grew up in the 70’s, this album was everywhere and unlike anything else. All of a sudden, long haired rockers were singing along to operatic songs with soaring arrangements, a far cry from Foghat!

“Queen became one of the world’s greatest bands by working hard. They toured endlessly and in the studio, they strived for perfection and that’s our challenge on stage. How do you do perfection?  Answer: by working hard!

“Alongside the vocals comes the challenge of Brian May’s overdubbed guitar sound. We’ve got a small army of guitarists to cover the flash and fun.  Classic Albums Live loves a good challenge. Queen provides just that.

“We’re all familiar with “Bohemian Rhapsody” and “You’re My Best Friend,” but it’s the deep tracks like “Prophet Song” and “Love Of My Life” that reveal a profound depth of songwriting.

“First set is the album “A Night At The Opera.”  Second set: more Queen hits and classics.“

Tickets for the Classic Albums Live: Queen show are priced at $34 in advance (fee-free!). There are also premium seats – beach chairs are provided by the Series – set in two rows directly in front of the stage for $109. Tickets for this show will go on sale Friday, April 19th at 10 a.m. through Lowell Summer Music Series. Children under 12 are always free – parents, this is a great way to introduce your kids to live music in a safe, family-friendly environment. Don’t forget their ear protection!