And now for something completely different… Theatre! 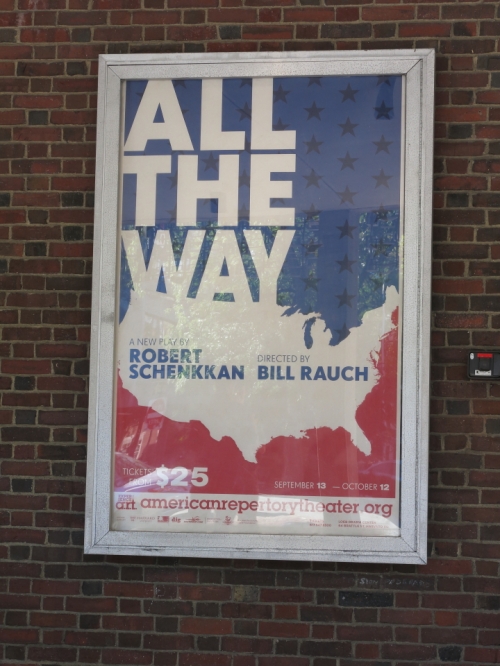 The day was filled with wonderful live performances – theatre, though, not music (although there was a little music thrown into the mix)! 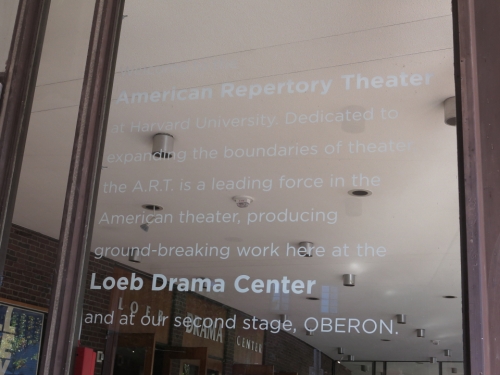 The day started when I got on line (I’m from New York – we get on line, not in line) at the American Repertory Theatre in Cambridge, Massachusetts at 9:05 a.m. in order to score one of a maximum of $25 standing room tickets for the matinee performance of “All The Way”, a world premiere of a play by Robert Schenkkan about the first year of LBJ’s accidental presidency. I was the third person there, so I felt confident that I’d be able to buy one of the prized tickets.

When the line was allowed into the lobby to wait for the box office to open at noon, it wasn’t possible to maintain a line.  One young woman came to the rescue – she’d brought colored marking pens and index cards so she could make and distribute numbers! That turned what could have been an ugly situation with people arguing over who was there before whom into a stress-free and enjoying morning of great conversation.

Yes, I scored a ticket!

While enjoying the wonderful early0autumn day, I caught a couple of songs from a performer whose name I did not hear at the New England Americana Music Festival. I wish I’d had time to hear more music, because there were some excellent local musicians performing at the weekend-long festival. Some of the stages were free, some required tickets.

“All the Way” starts Bryan Cranston, who many of us know as Walter White/Heisenberg in AMC’s hit show “Breaking Bad.” From the moment he took the stage, I was captivated by him. I think it’s a testament to his great acting ability that no thought of Walter White crossed my mind. I’m not an actor, but I sense it can be difficult to act so that your audience forgets about your iconic role(s). Not only did Mr. Cranston achieve that for me, so did Michael McKean as J. Edgar Hoover. No thought of Lenny of “Laverne and Shirley” for me!

This was a true ensemble performance. Almost all the actors played multiple roles, and all performed admirably.

If you are in the Boston area, I’d recommend seeing this play which runs through October 12 before it presumably will land on the Great White Way.

My evening’s theatre performance was by a relatively new theatre company called Amazing Mustache Productions. It was a David Mamet double bill of “Duck Variations” and “Sexual Perversity in Chicago”. The latter play starred my nephew, Matt Seaver, as a truly sleazy man who believes he knows what women want. What made Matt’s performance so good was that he is not at all like his character. Everyone performed admirably. I preferred “Sexual Perversity in Chicago” to “Duck Variations” (the plays themselves, not the acting).

Great theatre feeds my soul as much as great music does.