I love it when I go to a show not really knowing the artist (therefor having no expectations), and having my mind blown. That happened last night with Simon Phillips on his Protocol II tour stop at Scullers Jazz Club.

My friend asked if I wanted to see this show; since I wasn’t familiar with Simon’s name (although I of course know Toto, the band he’s probably best known for), I listened to a clip of his music. It took me less than 30 seconds of listening to know that I needed to see this show.

Walking into the club, it was impossible not to be awed by the drum kit. I have never sat behind the drums as I did last night, so maybe all drummers have as many drums and cymbals as Simon has. Judging by the number of people who took photos of the drums after the show, I’m guessing the array was unusual. 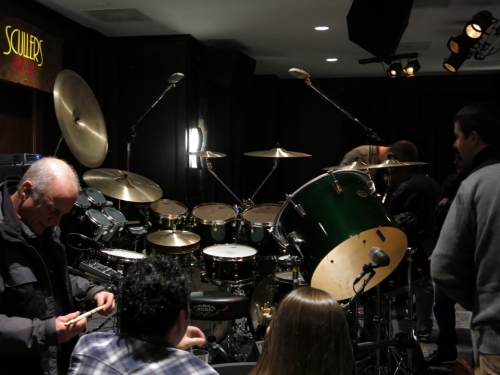 They took the stage casually, almost as if they were walking into their living rooms to play for a few friends. From the first notes, they were anything but casual.  The band is tight yet fluid. Precise but also improvisational.

The band comprises Simon on drums, Andy Timmons on guitar, Steve Weingart on keyboards, and Ernest Tibbs providing the low notes on bass. Each man is a terrific musician on his own, but together they have created a powerhouse of a band.

After the first number, Simon told us that they were going to perform their new album – which he said can be purchased only at shows – in full.  Each number seemed better than the previous one – I can’t say which one was my favorite until I listen to the album a number of times.

We sat behind Simon which ended up being a fascinating vantage point. Although we couldn’t see his face, we could watch his arms and legs moving across the drum heads and cymbals oh-so-smoothly. At one point, he was using the pedals to play both bass drums at the same time; I was amazed at how fast his legs were moving up and down. The sound was as fast as that of a machine gun firing. 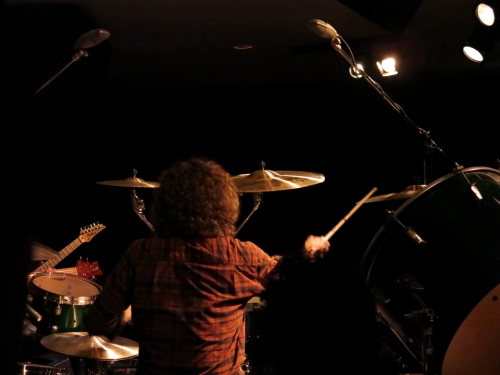 There is an art to making a drum solo truly stand on its own. I’ve seen some drummers who did that for me, most notably Max Roach. Simon is right up there with Max, at least in the realm of jazz drummers.

Last night was their first ‘real’ show in the United States after completing a European tour.  I hope this is the first of many tours.