Vapors of Morphine is an act – formerly known as Members of Morphine and also Ever Expanding Elastic Waste Band- that I’ve wanted to see for several years.

Morphine was one of my favorite bands of the 90s, but they split up when Mark Sandman died. I’d known for a while that the surviving members have a standing gig at Atwood’s Tavern, and finally made it there.Dana Colley, the baritone sax player, told us that the band is now called Vapors of Morphine because they are going in a new direction (at which time the three of them did a 180 degree turn).  Morphine’s style is recognizable but, as their name suggests, their music is only a hint of what Morphine was.

There was a small but appreciative crowd at Atwood’s last week for the band’s standing Wednesday night gig. Atwood’s is a small venue (85 person capacity) in any event, but I’d guess there were no more than 40 people there. 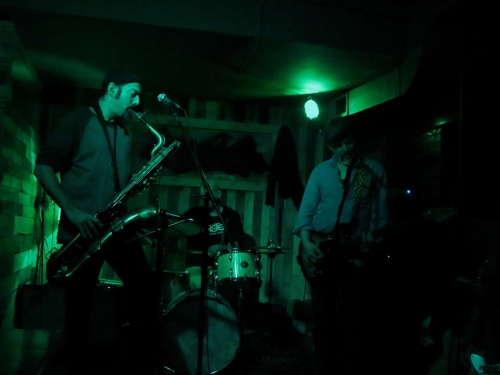 The music is a combination of blues and electronic rhythms, but that doesn’t accurately describe what I felt from the music. There was a bit of a trance vibe and a lot of a blues vibe. Here’s a link to a video from this show.

The other two members of the band on this night were Jeremy Lyons on strings and Jerome Deupree on drums.

I’m guessing that each show will be different so I’m already looking forward to seeing another show or two when I feel like staying out late on a Wednesday night.

Another night of excellent music!