I did not know what to expect from Amy Helm & The Handsome Strangers when I traveled down to the Katharine Hepburn Cultural Arts Center in Old Saybrook, Connecticut on Saturday night. 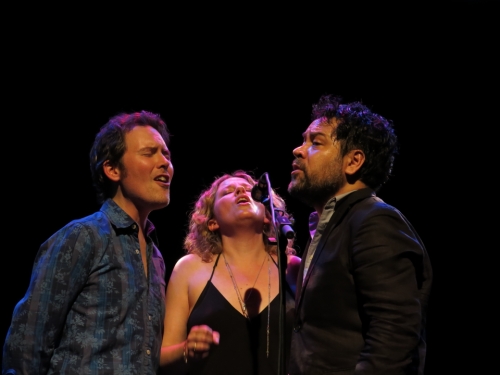 Amy Helm and two of the three Handsome Strangers (Bryon Isaacs on the left, Dan Littleton on the right)

I had only seen Amy once with Ollabelle (a folk band) and really enjoyed her then. This is a very different band, and I love it!The style of music is mostly blues, with some country and gospel thrown in for good measure. 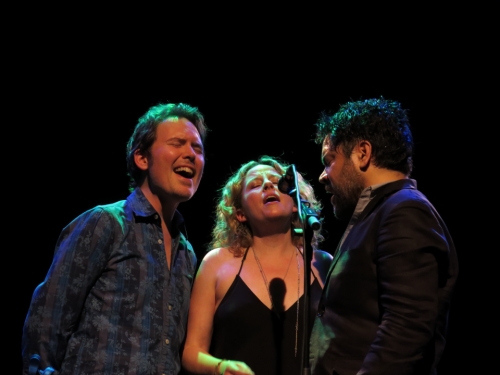 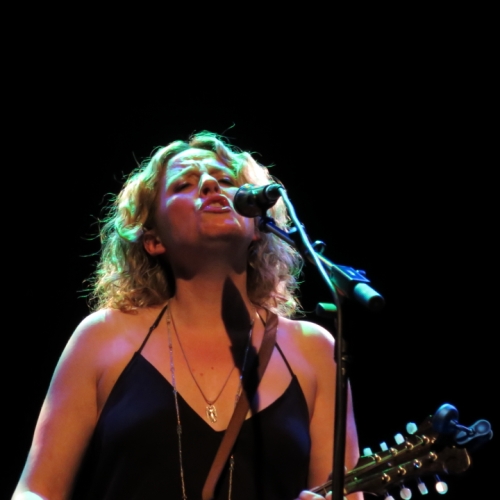 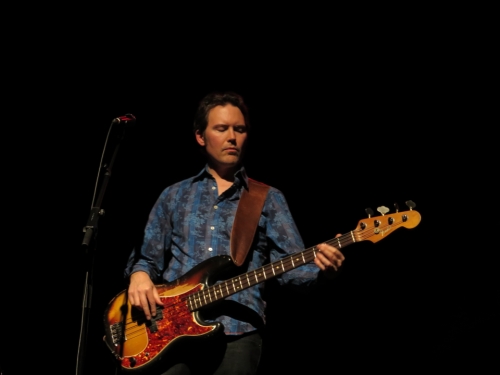 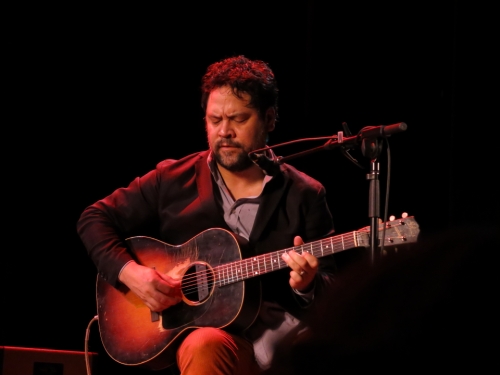 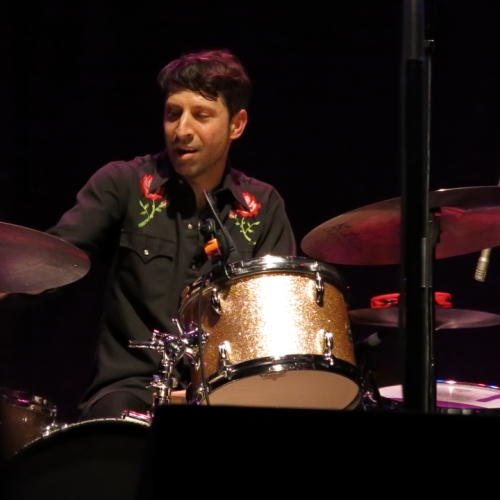 All of them are quite talented, but I was blown away by Dan.  Something about the way he plays got into my soul. He is not flashy; he sat and played his heart out for us, and the audience clearly appreciated it. 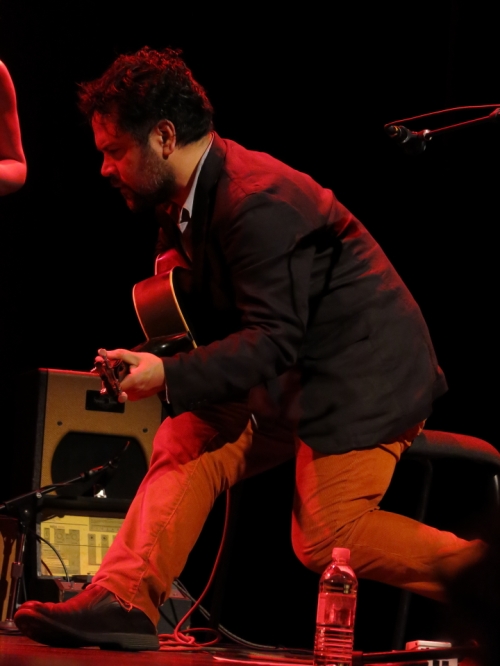 Dan wasn’t the only one on stage who performed like that, however.  The emotion that emanated from Amy when she played the mandolin but especially when she sang brought a tear to my eye more than once. 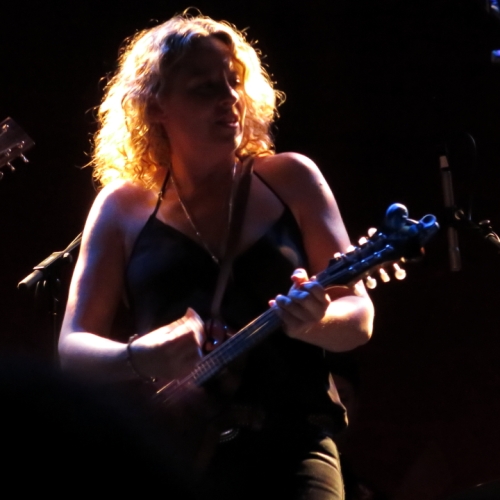 Byron write some of the songs they performed; one included a gospel song that I especially enjoyed (I love gospel music for the music, not for the spirituality). 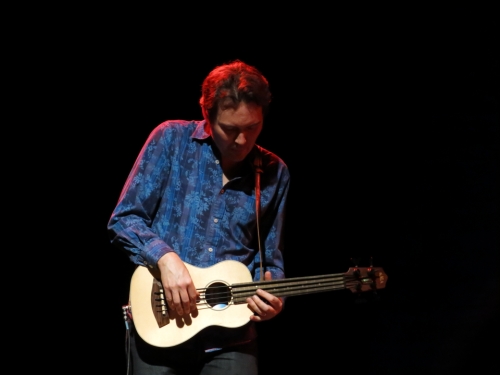 David is a fine drummer as well; I couldn’t see him much because as usual he was at the back of the stage.  I imagine that Amy is very picky about her drummer since she grew up with one of the finest drummers ever,  and that is a testament to David’s ability.

About half way through their nearly two-hour set, they came off the stage and performed a few a cappella numbers. The audience was silent and the pureness of the sound wafted through the auditorium so everyone was able to hear. That was magical!

Amy is the daughter of the late, great Levon Helm, and has worked with his bands as well as her own for many years; her mother is also a singer-songwriter. Amy is a terrific musician in her own right. 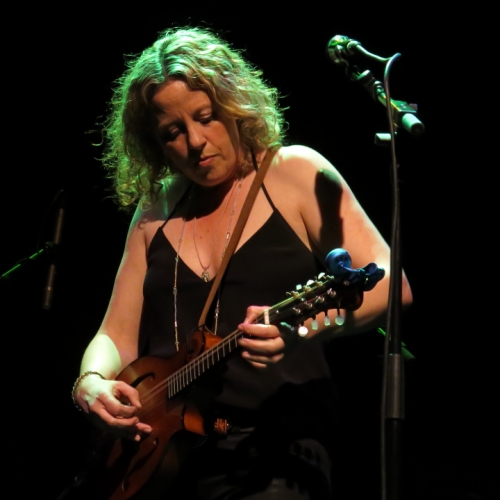 Opening was a band headed by a young (19 years old) musician named Connor Kennedy, also from Woodstock, New York. Connor is quite a good guitarist whose roots are rock and roll, but he seems to be taking it to a unique place. I expect we’ll be seeing more of this man. 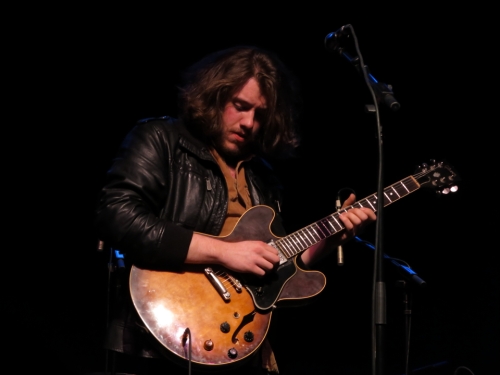 The members of Connor’s band are Will Bryant on keyboards, Lee Falco on percussion, and Brandon Morrison on bass; all contribute to vocals as well.  Unfortunately I did not get any good photos of them other than during the encore when both bands (as well as Brendan McDonough, who also played guitar during Amy’s set) played. I noticed that Will wore a Great Big Sea t-shirt (one of my favorite bands) and that caused a huge grin on my face! 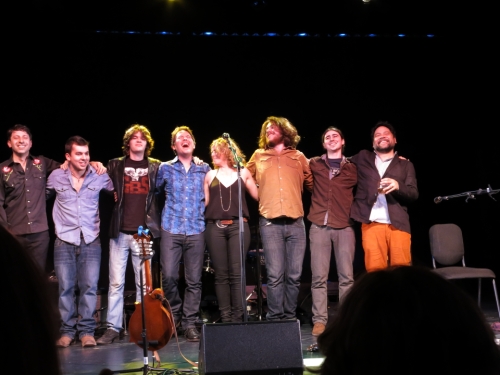 This show was well worth the two-hour drive each way. After the show when Amy, Dan, Byron and David were signing CDs and chatting with fans, I got a huge thank you from them for making the trip. I’ll travel for good music, and I’m glad I went to this show. Not only was it a terrific show but the venue is fabulous. I don’t know if the audiences at The Kate are always as respectful as they were at this show, but if they are, this is a true gem!

Amy (sorry about the mic blocking her face) 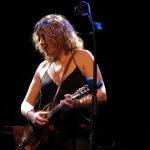 Both bands during the encore