On Friday I was privileged to be in the audience at the Regent Theatre for a fundraiser for Folk New England (FNE), an organization dedicated to preserving the music and the ephemera of the folk revival movement in New England. The size of the audience was smaller than the organization and artists deserved, but hopefully the great enthusiasm made up for it. 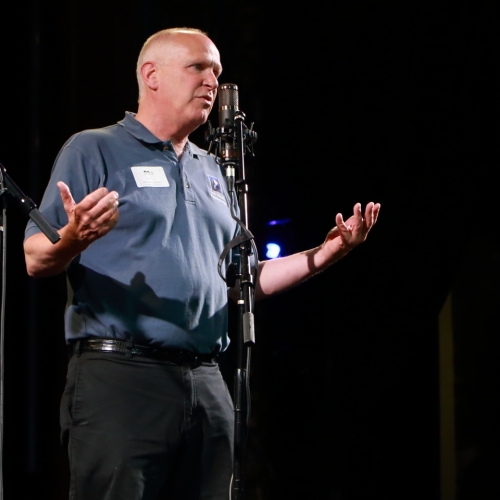 Before the music started, Rob Stegman, director of the film about Club 47, For the Love of the Music, showed a trailer for Pack Up Your Sorrows, a film about singer-songwriter Meg Hutchinson who is battling bipolar disorder. The opening for this film is at the Regent on June 18th.

Opening the show was Tumbling Bones, a band with which I was unfamiliar.  Based in Portland, Maine, the trio plays both original and traditional tunes in an old-timey, mostly bluegrass style.

Pete Winne (guitar and foot percussion), Jake Hoffman (banjo and upright bass), and Kyle Morgan (guitar) comprise the band. They alternated singing lead during their too-short set.  They switched instruments throughout the set, trying to set their personal record for equipment switches! They were fun to watch and their music is excellent.

After an extremely quick set change, Sarah Lee Guthrie and Johnny Irion came to the stage.  I had seen them perform once, but was unprepared to love them as much as I did this night.

They are married to each other, so I expected chemistry. Their chemistry is incredible. Yes, they have beautiful harmonies but there were times they sounded like one voice. Sarah did most of the talking for the duo, telling limited stories about the songs (limited because they did not have much time on stage). 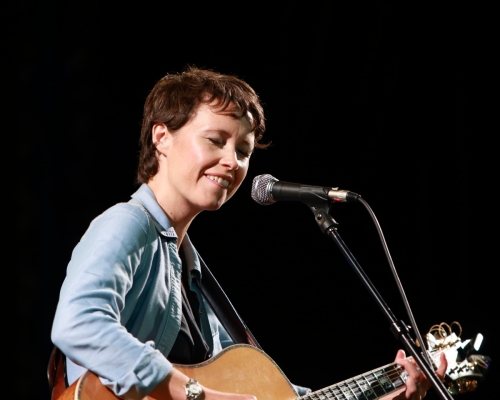 Johnny Irion (I love the way he looks at Sarah Lee)

My favorite song was ‘9 Outta 10 Times’. There were hauntingly gorgeous harmonies and beautiful synchronicity of their guitar playing.

They played a couple of songs for which they asked the audience to sing along including ‘Go Waggaloo” from their album of children’s songs. The audience lifted their voices on that one!

Maybe it was my mood or perhaps my being more open to different musical styles than I used to be, but I fell completely in love with Sarah Lee and Johnny. Everything about their performance got under my skin, in the best possible way. 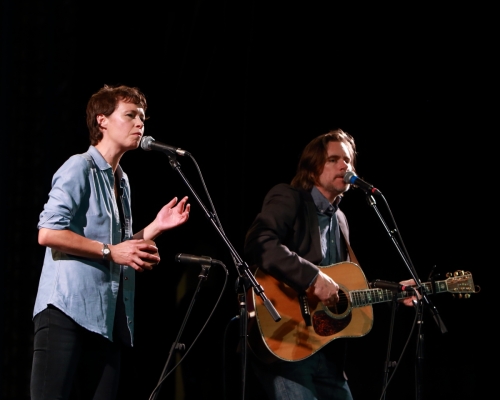 Patty Larkin was the headliner for this show. Well known on the Boston as well as the national and international folk scenes, Patty is a seasoned performer who knew just what to bring to the stage.

Patty told some stories about her early days in Boston, trying to make it as a folksinger and songwriter, but mostly she played. The songs she chose were a bit more traditional folk than her ‘folk-urban pop music’ which clearly appealed to the crowd.

Patty has a strong voice and her guitar playing is top-notch, and the audience appreciated every minute of it. She was an appropriate act to headline this show because of the path she took from her folk music roots to her 21st-century style. 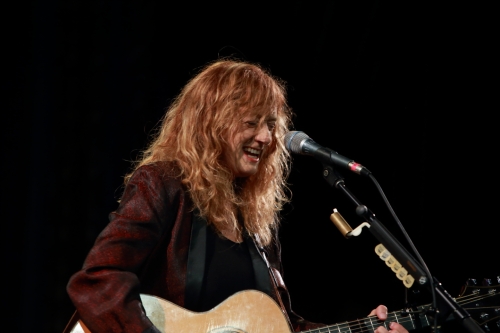 She obviously had a good time (as evidenced by the smile in the above photo), as did we all. I hope this event raised a lot of the funds much needed by Folk New England.  If you are interested in helping this fine organization, you can donate by clicking here.

Ticket courtesy of Folk New England; all opinions are my own.