I have now seen Trombone Shorty & Orleans Avenue enough times (at least eight) to know that the band delivers a fantastic high-energy show, but this show at the Lowell Summer Music Series surpassed any expectations I had. 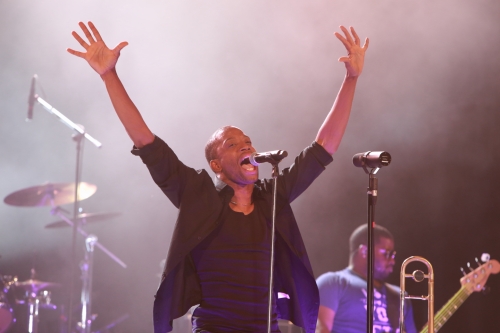 It was a gorgeous night in Boarding House Park – not humid, not hot (at least not after the sun passed behind the buildings), and, most important, not raining – and the crowd was ready to par-tay!

Troy ‘Trombone Shorty’ Andrews was also ready to party; he brought his A game to this show. During the last song of the set, he held a note on his trumpet for 2:49.53 minutes as timed by his road manager! The entire audience was staring in disbelief that he could do it, and I think he might have been surprised at himself as well. He looked exhausted but deliriously happy as he acknowledged the applause. 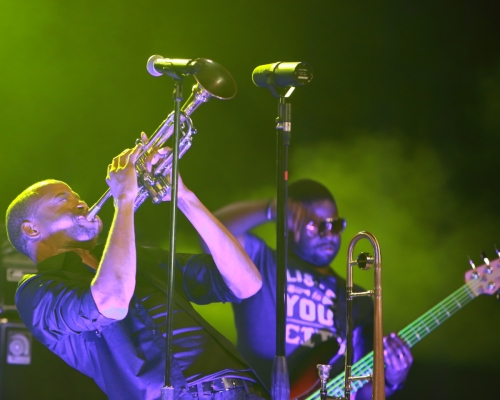 Trombone Shorty during the long note

As soon as he took the stage, preceded by a few seconds by his band, I was mesmerized (as always). He asked if we were ready to party, already knowing the answer to that question!

Orleans Avenue is a tight band. Most of the band members have been playing together for a number of years, and the chemistry among them is palpable. Mike ‘Bass’ Ballard on bass (as you would expect from his nickname), Pete Murano on guitar, Dan Oestreicher on baritone sax, Joey Peebles on drums, and BK Jackson on tenor sax comprise the band. 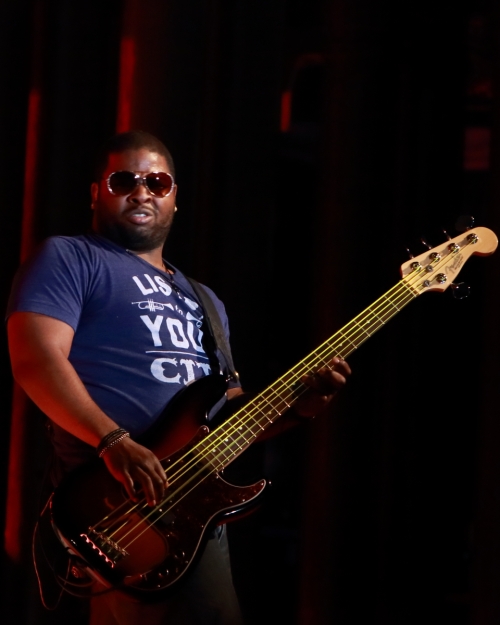 Jackson is a newcomer to the band; Shorty introduced him and said it was his first time in Lowell. I hope it is the first of many performances! 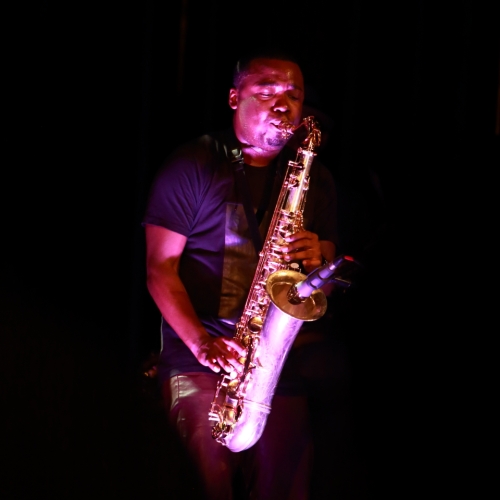 I did not take notes on the set list, but I know they performed Lenny Kravitz’s ‘Sistamamalover’, which I heard for the first time last summer at Shorty’s first show at the Series.

Shorty is maturing as a performer. His voice sounded stronger than ever and he seemed to sing more than he has at other shows I have seen. Is he gaining confidence? I do not know, but his voice is equal to the quality of his trombone and trumpet playing.

For those of you unfamiliar with Shorty, he is a member of the extremely musical Andrews family from New Orleans. He has played trombone since he was five years old (he is now 29); at that age, the trombone could well have been taller than he was! His style is a mixture of funk, jazz, and hip-hop. 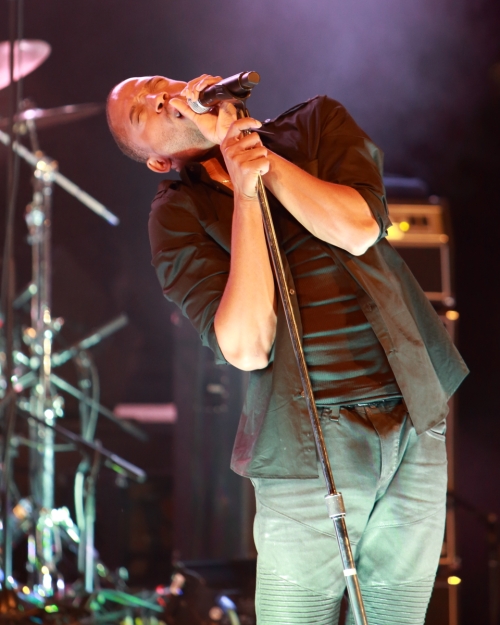 For the encore, the band walked through the audience playing ‘When the Saints Go Marching In’; this was the first time I have seen him leave the stage and the audience was thrilled! Apparently people in their path made room, moving chairs, bags, and blankets so they would not fall over anything. This was another special moment in this show. 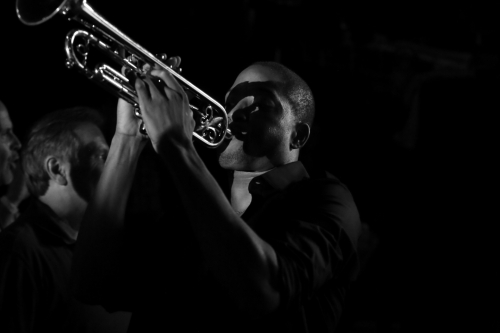 Trombone Shorty (in the audience during the encore)

Trombone Shorty (in the audience during the encore)

There was a man in the audience who had a red glass trombone, and Shorty invited him to play with them when they went back to the stage after their walkabout. What a thrill that must have been for him!

BK Jackson and Trombone Shorty (on stage after their walkabout)

Opening the show, as they did last year, was The Party Band, a loose roster of mostly horns players who met at the University of Massachusetts – Lowell. There were 23 musicians on stage this night, versus 34 last year (and 14 the first time I saw the band two years ago)!

There was a pathway set aside for them to use so they could send various instruments back to the sidewalk to play as featured musicians. Sometimes it was an entire section (the trumpets), other times it was only one player (baritone sax). 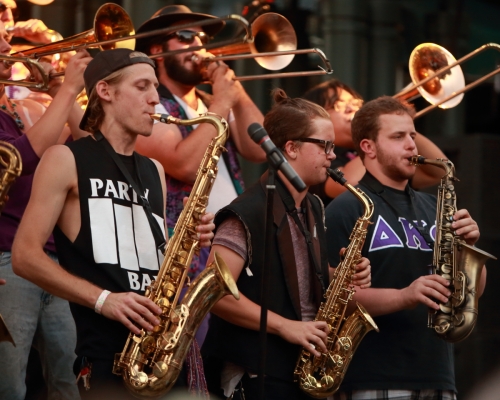 They are the ideal opener for Shorty, who they love and admire (I met band leader Seth Bailin at the Shorty show at the House of Blues in December 2014. 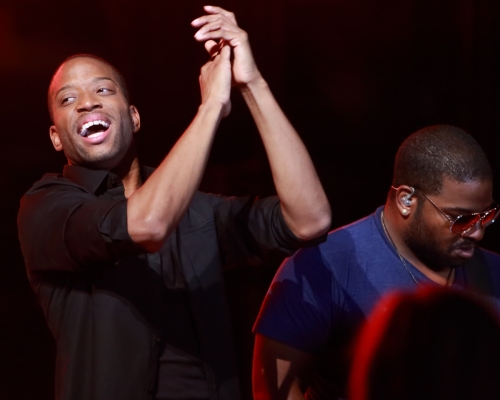 I have no idea how many people in the audience were seeing Trombone Shorty for the first time, but I hope every one of them walked away from the show deliriously happy after seeing such a great performance. 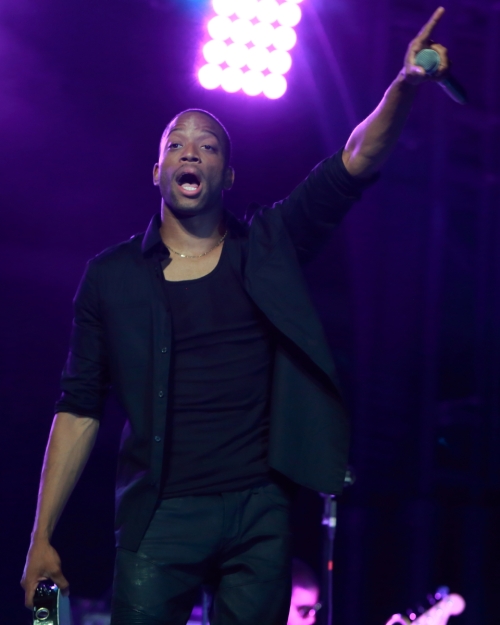 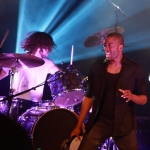 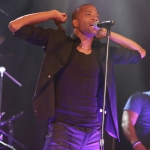 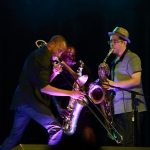