← The Get Right Band Funked Up The House!
Wisewater, A Delightful Duo, Delivered An Excellent Roots Show →

Tribute To Mighty Sam McClain And Benefit for Homelessness – Be There!

Mighty Sam McClain was a fixture on the Boston (and national) music scene for many years, and it was a great loss when he died five months ago. A tribute to his life with performances by many who knew him well is being presented at the Regent Theatre in Arlington, Massachusetts on Saturday, November 28th. This is a wonderful way to give thanks over Thanksgiving weekend. The information you need to order tickets is contained in the press release by Callanan & Klein Communications. I took none of the photos and credited the photographer if I know who took the shot.

A Mighty Love—A Tribute to Mighty Sam McClain is an evening to remember and celebrate the life and music of Mighty Sam McClain, who died at age 71 in June 2015. The fundraiser to benefit homelessness (an issue near and dear to Sam’s heart) is set for the Regent Theatre in Arlington, MA on Saturday, Nov 28 at 7:00 PM, the Sat. after Thanksgiving. An all-star line-up includes artists from blues, soul and rock ‘n’ roll who are coming to honor Sam from multiple cities and countries (see full list below).  There will also be video messages from other famous friends that worked with Sam. The event honors the life and music of Mighty Sam McClain, with his friends and those who have been deeply affected by the life and death of this great pillar of American music. 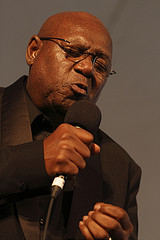 Sam said it best, “I’m a singer—a man with a song and I have a message for you—love one another and to your ownself be true.”  Sam McClain had a mighty voice, and a huge heart.  He shared his joy, his pain and his soul through his music and touched many, many people. Expect some tears and also jumping for joy, as we celebrate the life and art of Mighty Sam McClain.

Seated tickets range in price from $20 to $25 to $35 and children under 18 are half price. Tickets are available by clicking here, or charge by phone at 781-646-4TIX (4849). Tickets may also be purchased Monday-Saturday 12:00pm-6:00pm at the Regent Theatre Box Office (7 Medford St., Arlington, Massachusetts) as well as two hours before the show. For more information on ticket sales contact the Box Office and for information about the show email: mightylove@mightysam.com.

Mighty Sam McClain was once described as “America’s best purveyor of red-clay soul blues” and was widely considered one of the greatest soul singers that ever lived.  The songs he wrote and chose to sing—whether soul, spiritual music, R&B, blues, funk or the cross-cultural love duets he recorded in recent years with Iranian vocalist Mahsa Vahdat—were transformed by the elemental properties of his voice, which seemed as strong, natural and enduring as a redwood, as deep and swirling as the Mississippi, and as clear in its messages and ability to bear witness as a prayer.

Songs/Recordings Mighty Sam was known for include:

Samuel McClain was born in Monroe, Louisiana in 1943. His father left when Sam was two years old, and he began singing in his mother Emily’s Baptist church at age five. Even at that age, he knew he had a gift and determined to use it. Sam began to sing professionally in elementary school, when his physical education teacher put a backing band together and began booking him at kids’ parties and dances. But at age 13, after years of abuse from his stepfather, he’d had enough. He considered shooting the violent man with one of his own hunting rifles. Instead, Sam left home, sneaking out through a window at night, and did not see his beloved mother for four decades. He carried the pain of that experience throughout his life.

Then in New Orleans Sam recorded an EP that included Sam’s blues hymn “Pray.” New Orleans musicians and booking agents began to take notice of his astonishing vocal abilities. A chance encounter with a Japanese tourist visiting the Crescent City led to a tour of Japan and a live album in 1987 that raised his profile. The same year he appeared on Hubert Sumlin’s Blues Party, an album organized by guitarist Ronnie Earl for the then-high-profile US blues label Black Top. The four songs Sam sang on that album began getting him consistent airplay in the US for the first time in nearly 20 years.

The 1990s were a dynamic and life-changing period for Sam. He started to crystallize a new vision for his music. His writing began to weave together the spiritual and the secular, and the stories in his songs became compelling parables from everyday life and from his own experiences that made keen observations about faith, dignity, race, oppression, freedom and social responsibility. He was rewarded by the many letters he regularly received from fans around the world who said their lives had been changed for the better by his music.

In a typical display of his willpower, he gave up drinking one day, literally, after deciding it was interfering with his goals and his personal life. Most important, he married Sandra, affirming their deep romance, which would last throughout the remainder of his life. Through her and her children, he also found the loving family connections that he had craved for so many years. In 1995 Sam also formed a musical partnership with his bandleader and guitarist Pat Herlehy, who would also become Sam’s co-arranger, engineer and co-producer. They remained close friends for 20 years and recently created two more albums, Undiscovered — Diamond in the Rough and Up from the Dust, which have yet to be released.

Sam started Emily’s Son Publishing in 1996 and then launched McClain Management with Sandra. He also began producing his own albums and in 2003 created his own label, Mighty Music, with the release of One More Bridge to Cross. That album was followed by Betcha Didn’t Know in 2009 and 2012’s Too Much Jesus (Not Enough Whiskey), which garnered more Blues Music Award nominations.

Sam’s social consciousness, his time living on the streets and the hardships he endured in childhood made him a perfect fit for the 2008 benefit compilation CD, Give US Your Poor, which was dedicated to help fight homelessness. Rock star Jon Bon Jovi duetted with Sam on Sam’s original song “Show Me the Way,” co-written with his saxist Scott Shetler. Sam also recorded and performed with singer Natalie Merchant to address homelessness. Touring behind the project, Sam appeared onstage at Lincoln Center, the Kennedy Center, and Strand Theatre in Boston.

In 2009, the Norwegian guitarist and songwriter Knut Reisersrud invited Sam to make an album of love duets with Iranian folksinger Mahsa Vadhat. The album, Scent of Reunion: Love Duets Across Civilization, was an effortlessly beautiful bridge that transcended cultures and ideology to speak in the language of the heart. It reached number six on the European world music charts and was nominated for a Grammy in Norway. They recorded an equally remarkable sequel in 2012 titled A Deeper Tone of Longing, which followed a 2011 soul-blues collaboration between Sam and Reisersrud called One Drop Is Plenty. Sam also lent his voice to the theme song for filmmaker Ernest Thompson’s 2013 drama Time & Charges.

In recent years, Sam’s recordings became more rhythmically driving and intense, with Too Much Jesus (Not Enough Whiskey) at times evoking the classic funk of James Brown and Sly Stone thanks to Sam and Herlehy’s arrangements and the raw, focused power of his road-honed seven-piece band. The unreleased Up From the Dust showcases Sam and Herlehy blending yet another element into Sam’s music – ’60s rooted, groove driven psychedelia.

Sam declared that “to me, making music is all about freedom. I believe I have a gift from God and I’ve worked hard all my life to pursue my own vision of it. This is what I do, and I’m going to keep doing it as long as God gives me breath.”

← The Get Right Band Funked Up The House!
Wisewater, A Delightful Duo, Delivered An Excellent Roots Show →