A Crowd Favorite Returns To The Lowell Summer Music Series For The Fourth Time!

Bruce Hornsby has delivered three excellent performances at the Lowell Summer Music Series and I am excited that he will appear for the fourth time on Thursday, August 31st! He is a consistently fine performer and you should take this opportunity to see him again if you have seen him in the past and if you have not, you should see him for your first time at a venue he enjoys!

“Bruce Hornsby has built one of the most diverse, collaborative and adventurous careers in contemporary music. Drawing from a vast wellspring of American musical traditions, the singer/pianist/composer/bandleader has created a large and accomplished body of work and employed a vast array of stylistic approaches. Throughout this period, Hornsby has maintained the integrity, virtuosity and artistic curiosity that have been hallmarks of his work from the start. 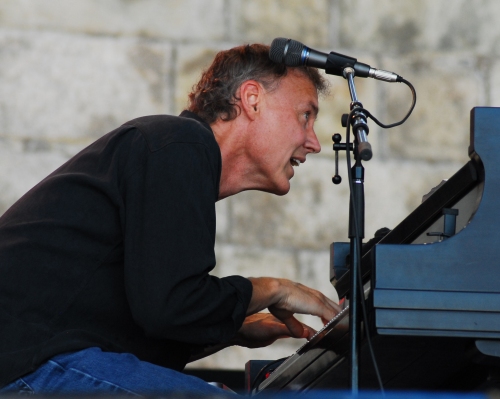 “Hornsby and his band The Range’s first album The Way It Is (1986) was steadily and slowly building in popularity in the U.S. when in August the title track exploded on BBC Radio One in England, then Europe, the rest of the world and finally in the United States. The record went on to sell three million copies, the band played Saturday Night Live and opened for Steve Winwood, John Fogerty, Huey Lewis, the Grateful Dead and the Eurythmics before becoming headliners on their own tour supported by Crowded House.

“Over the years Hornsby has successfully ventured into bluegrass, jazz, classical, and even electronica, reflected on acclaimed releases like two projects with Ricky Skaggs- Ricky Skaggs and Bruce Hornsby (2007) and the live Cluck Ol’ Hen (2013), the jazz trio album Camp Meeting (2007) with Jack DeJohnette and Christian McBride, and Solo Concerts (2014), a stylistic merging of traditional American roots music and the dissonance and adventure of modern classical music. This latter-day interest has led to an orchestral project spearheaded by Michael Tilson Thomas featuring this new music; the first performance occurred in January 2015 with Tilson Thomas’ New World Symphony.

“His three Grammy wins (along with his ten Grammy losses!) typify the diversity of his career: Best New Artist (1986) as leader of Bruce Hornsby and the Range, Best Bluegrass Recording (1989) for a version of his old Range hit “The Valley Road” that appeared on the Nitty Gritty Dirt Band’s Will The Circle Be Unbroken Volume Two, and a shared award with Branford Marsalis in 1993 for Best Pop Instrumental for “Barcelona Mona”, a song written and performed for the 1992 Olympic Games.

“Bruce’s long involvement with the Grateful Dead began when the group asked him to open two shows in Monterey, CA in the spring of 1987. Bruce and the Range continued to open shows for the Dead in 1988, 1989 and 1990, and after the tragic death of Dead keyboardist Brent Mydland the band asked him to play with them. He started winging it with them with no rehearsal for five nights at Madison Square Garden in September 1990 and played more than 100 shows with them until March 1992. He continued to sit in with the band every year until Jerry Garcia passed away in 1995. He played in the first post-Dead band “The Other Ones” in 1998 (the album “The Strange Remain” chronicles that tour) and 2000. Bruce reunited with the band for the 50th Anniversary Fare Thee Well concerts in June and July 2015 at Levi’s Stadium (Santa Clara,CA) and Soldier Field (Chicago). He appears on seven Grateful Dead records including “Infrared Roses” and “View From The Vault II”.

“Three decades after Bruce Hornsby established his global name as the creator of pop hits that defined “the sound of grace on the radio,” as a Rolling Stone reviewer once wrote, such projects continue and are consistent with his lifelong pursuit of musical transcendence. “It’s always been about staying inspired, broadening my reach and range of abilities and influences, and exploring new areas”, Hornsby says. “I’m very fortunate to be able to do that, to be a lifelong student, and to continue to pursue a wide-ranging musical life.””

Tickets for the Bruce Hornsby show are priced at $40 in advance (fee-free!) and children 12 and under are always free courtesy of Eastern Bank. There are also premium seats – beach chairs are provided by the Series – set in two rows directly in front of the stage for $140. Tickets for this show go on sale on Friday, May 12th at 9 a.m. through Lowell Summer Music Series.