← Sons Of The Allman Brothers, The Allman Betts Band, Are Coming To Lowell
Here Is Something For The Folkies Out There →

Two veteran acts are joining forces to each present a full set at the Lowell Summer Music Series on Saturday, August 24th. Toad the Wet Sprocket and Big Head Todd and the Monsters is the newcomer; I made the mistake of not seeing Toad the last time because I went to a birthday party instead (I’ll never make that mistake again) and while I’ve seen Big Head Todd, I did not see last year’s show because I was living elsewhere (I won’t make that mistake again either).

“Big Head Todd and the Monsters are not that big on anniversaries, so there won’t be any big hoopla over the fact that the band is officially crossing the three-decade mark this year. Thirty years would seem like something to commemorate, especially with the same core lineup, an achievement few other name-brand bands can boast of. Yet right now they’re less about celebrating stability than volatility, in the form of their eleventh studio album, New World Arisin’, which makes good on its forward-facing title with what might be the brashest rock and roll of their career. The old world can’t rest on any laurels, and neither will they. 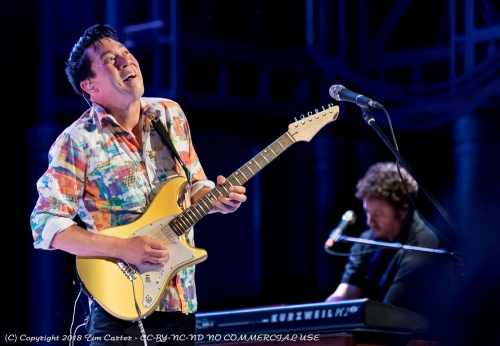 Big Head Todd and the Monsters

“”We’re in a real exciting part of our career right now,” says co-founder Todd Park Mohr. “We’re a viable band with a great audience and we’re able to work at a very high level. It’s a career that’s getting more and more interesting, rather than less, which is remarkable,” he says, chuckling at the unlikelihood of anyone being this cheerfully all-in, this far in. “I mean, 30 years into it, I really feel like: Wow, this is getting fun. I’m learning more about music and about my instrument, and it’s just really engaging in every way. We also dovetail well with the times, I think; I feel like we have something to say.”

“He doesn’t feel these musical zigzags will give fans musical whiplash. “The fact is, most people, like myself, listen to multiple genres of music, so I don’t think people have a problem with variety. I love it.”

“But if there’s a dominant musical motif to New World Arisin‘”, it’s “straight-up rock-pop,” says Mohr. That contemporary approach might come as a slight surprise to hardcore fans that saw the Monsters take a seriously rootsy turn or two in the last 10 years. The band embarked on a side project, dubbed Big Head Blues Club, that saw them paying homage to Robert Johnson and bringing in venerable guest collaborators like Charlie Musselwhite and the late B.B. King. The heavy blues influence that dominated their alter-ego band carried over some into the last actual Big Head Todd and the Monsters album, 2014’s Black Beehive. That element isn’t altogether missing in New World Arisin‘”; you’ll certainly hear it recur in “Long Coal Train.” But this time the blues take a definite back seat to the unapologetically mainstream instincts that had Big Head Todd going platinum in the mid-’90s with the album Sister Sweetly, which spawned the rock radio hits “Broken Hearted Savior,” “Bittersweet,” and “Circle.”

“”Commercial success is still a goal for me and for our band,” Mohr says, “as far as the sense of communicating to, or striking a chord with a large number of people. We feel like we have something to say and something to offer the culture.” Plus, a true confession: “I’m interested in the pop song! And I think “Damaged One,” for one, is a classic pop song. Our label would have killed for that song, back then,” in the wake of those mainstream radio hits that established the band. “They begged me to write it! So there’s a lot of irony in our coming back to that.”

“The history of the group actually stretches farther back from the 1987 point at which they took their name. The core members came together at such an early age that it’s hard to know exactly how many candles to put on their collective cake. “It’s murky,” Mohr says, “because I’ve been playing with Brian (Nevin, their drummer) since junior high school, so the two of us go back to 1982. Brian and I played a talent show with Rob (Squires, the bass player) in 1983, and then we continued to plug at it, at a kids’ pace,” he laughs. They began playing original music in earnest in a nascent Colorado music scene that then consisted almost entirely of cover bands. A début album, Another Mayberry, arrived in 1989, though it would be another four years before Sister Sweetly made them a national phenomenon. The only personnel change in these three decades has been the addition of a fourth member, putative “new guy” Jeremy Lawton, in 2004.

“While they enjoy a robust fan base around the country, their success is outsized in Colorado, where they’re practically the unofficial state band. That’s evident in their ability to sell out Red Rocks, the most revered amphitheater in the nation, where they’ve headlined 19 times. It also comes into play when the band gets asked to be a part of commemorative moments: Mohr recently sang the national anthem at a Rockies game, and the entire band took part in the parade through Denver after the Broncos took the Super Bowl.

“What’s clear is that Big Head Todd is one multi-headed rock monster, easily traversing the most accessible hooks and the heaviest grooves. It’s not surprising that they would appeal to any audience or sub-audience that values durability over flavors of the moment. But Mohr has to laugh when he thinks about how little the possibility of long-term perseverance was on the members’ minds 30 years ago.

“”When you form, I think your goal is to make it through the party on Saturday night,” he points out. “In art, longevity isn’t the goal. It’s a happy accident if it happens, and I think ours was one of those convenient accidents that led to a happy marriage. But we happen to get along really well and love being with each other and playing music for a living.” Simple as it may sound, that’s a profound recipe for endurance in both the old world and the new.”

“Celebrating 30 years as a band, Toad the Wet Sprocket is still making music and touring with the same spirit of unwavering independence that started it all over three decades ago. 2019 marks two important milestones for Toad. One is the 25th Anniversary of their Platinum album Dulcinea, originally released in 1994, which featured the hits “Fall Down” and “Somethings Always Wrong”. The second is the 30th Anniversary of the band’s very first album Bread & Circus, which was re-released commercially in 1989.

“The band is thankful for the continued enthusiastic support of their fans, which helped spur the release of All You Want and also serves as inspiration for the band to tour and play live. They also continue to support their most recent releases, New Constellation (2013) and The Architect of Ruin EP (2015). Toad the Wet Sprocket share in the kind of musical chemistry that can only come from meeting in high school and writing, recording and touring on albums over the course time. After Bread & Circus, they followed with Pale in 1990, fear in ’91, Dulcinea in 1994, and Coil in 1997, as well as some compilations along the way. While most will still feel the comforting familiarity of the Billboard-charting hits, “Walk on the Ocean”, “All I Want”, “Something’s Always Wrong”, and “Fall Down”, fans will also be well familiar with tracks with lyrics that resonate for so many life milestones like “The Moment”, “I Will Not Take These Things for Granted” and so many more.”

Tickets for the Big Head Todd and the Monsters/Toad the Wet Sprocket show are priced at $55 in advance (fee-free!). There are also premium seats – beach chairs are provided by the Series – set in two rows directly in front of the stage for $155. Tickets for this show are currently on sale through Lowell Summer Music Series.

← Sons Of The Allman Brothers, The Allman Betts Band, Are Coming To Lowell
Here Is Something For The Folkies Out There →