I was very excited about this show at the Mahaiwe Theatre – to be able to see American Blues master Taj Mahal on the same bill as Vusi Mahlasela, the Woody Guthrie of South Africa, was indeed a special occasion.  I’ve seen each of them a few times and knew what to expect. 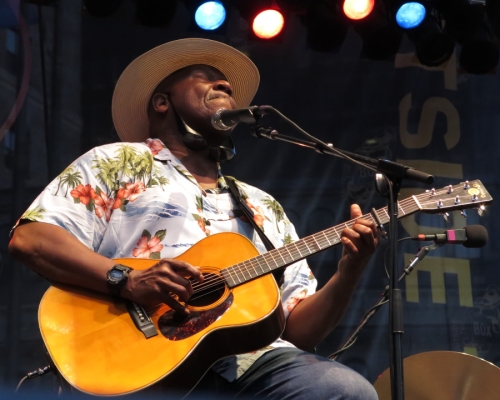 Taj Mahal at the Outside the Box Festival July 2013 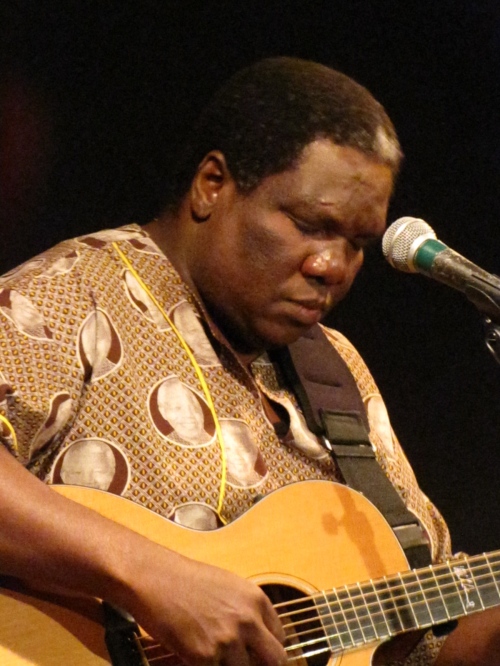 Vusi Mahlasela at Regattabar in February 2011

What I wasn’t expecting was to be blown away by the opening act, Fredericks Brown. This band is two women, Stephanie Brown and Deva Mahal (yes, you now know what I didn’t when listening to them – she’s Taj’s daughter). Stephanie plays keyboards and provides backing vocals. Deva sings. Boy, does she sing!  I think everyone in the audience was captivated by her voice as soon as the first song burst from her mouth.  Mostly soul music with some pop and blues, they performed for about a half hour and received a standing ovation.

Immediately after Fredericks Brown left the stage, Vusi took the stage solo (which is the only way I’ve seen him). Vusi’s songs stem from the dark days of apartheid but they are full of hope for humanity. He sings of forgiveness, love, respect, and wisdom – and ubuntu. Many of his songs are sung in various languages – Zulu, Xhosa, and English to name a few.

Vusi treated us to some dancing and some stories, mainly about the meanings of the songs. He did not speak much of his deep friendship with Nelson Mandela tonight. His voice is sure and strong, a perfect counterpoint to the lyrics.

After a brief intermission, the Taj Mahal Trio took the stage. From the second they started playing, Taj was in control.  The set opened with “Gone Fishin” which is one of his best-known songs. Everything he played was known to this listener (“Lovin’ in My Baby’s Eyes” – which was written for his daughter, “Corinna”, and others) but all songs were played with some improvisation that enhanced my enjoyment of the show.

Taj brings many instruments to the stage – at least five guitars, one of which is copper and absolutely gorgeous, banjo and ukelele – and he used all of them. He didn’t play keys at all tonight.  The chemistry Taj has with his bassist and drummer is palpable.

He brought Vusi to the stage to sing “Zanzibar”, one of Vusi’s songs, and it was fabulous. Talk about chemistry between musicians – I saw sitting close enough to enjoy their eye contact, smiles, and laughs.  For the encore, Taj brought everyone back to the stage for the encores. Amazing!

I saw Taj’s trio perform at an outdoor festival during the horrible heat wave that Boston suffered through in July.  The heat must have understandably affected them (how could it not – it was 95 degrees and about 95% humidity) because, while I loved the performance in July, tonight was outstanding. They expressed to the audience how much fun they were having playing for us, and we appreciated it.

This show was worth spending two and a half hours in the car each way to attend. The Mahaiwe is a little gem of a theatre – small and intimate, excellent sound, comfortable seats, and what appeared to be good sight lines from every place in the theatre.

If this tour is coming to a city near you, get tickets – it’s a rare opportunity to see blues masters perform together.