← An Evening of Hard-Driving Blues
A Bluegrass Ball??? Who Knew? →

I had never seen David Sanborn perform; when we noticed he was doing several shows at Scullers, we had to go. We had another show to attend earlier in the evening, so we rushed to Scullers for his 10 pm show. I generally prefer the late show for jazz; the band is completely warmed up and is generally looser for the later set.

We got there a few minutes after the show started, but the audience was already fully engaged. One of the things I love about jazz audiences is that they tend to be very respectful of the musicians.

David was performing with Joey DeFrancesco, a terrific organist, and an excellent drummer who might have been Billy Hart.  Each took turns doing solos, but the show was mostly David. 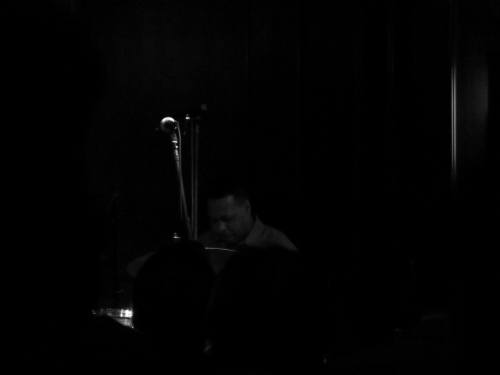 Very dim shot of the drummer

I wish I had taken notes of the song titles because the only one I remember was ‘The Dream.’ He renamed it ‘Ode to a Screw’ for the evening; a screw had popped loose from his sax and he told the audience that he’d buy a drink for the person who found it! Someone finally did, but I didn’t see whether or not he got a drink for his efforts!

David is a wonderful saxophonist. I would not call his style easy-listening, but he is accessible and easy to listen to. He is incorporating more traditional jazz into his music which I appreciate.

This was the first time I heard Joey perform and I thought he was a great addition to the trio. He does not always play with David’s band so I feel we were lucky to have had the chance to see them together.

They played to what appeared to be a sold-out crowd, since Scullers opened some panels in the back of the room and added a few high-top tables. Selling out a venue for a Friday night late set is impressive!

← An Evening of Hard-Driving Blues
A Bluegrass Ball??? Who Knew? →