I surprised myself at how much I enjoyed St. Vincent‘s show at the House of Blues last week!

Her music is not of the style I generally enjoy, but I saw her perform with David Byrne 18 months ago, loved what I heard, and was excited to see her again. Her solo show proved that she has the power to be a headliner.

St. Vincent (birth name Annie Clark) has a style that is hard to quantify. I don’t feel she is true electronica (probably because I’m not a fan of most electronica), yet she has electronic elements to her music.

Her visage is that of a frail bird, yet her performance shows she is anything but frail. The show is almost, but not quite, performance art. The lighting is synchronized with her movements so they look somewhat staccato at times. 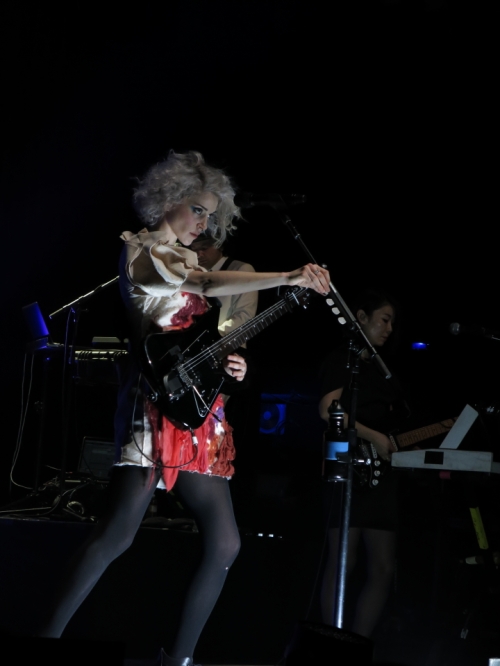 Her band supported her admirably. The band comprises a drummer (of whom I could not get a decent photo), keyboardist, and synthesizer/guitarist. Unfortunately I do not know their names. 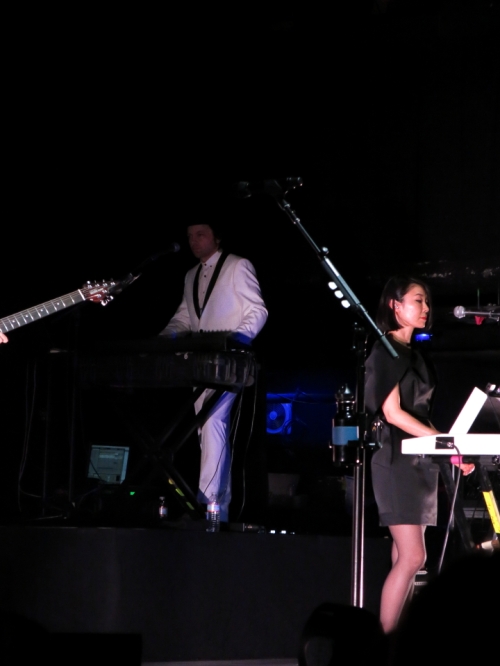 There were several times during the show when St. Vincent and her guitarist played as if they were Keith Richards and Ron Wood – that was a real pleasure to witness!

St. Vincent and her guitarist

One of the things I particularly enjoyed was when, as a lead-in to another song, she told the audience some ‘facts’ about us. They were recited as a poem, and worked beautifully.

St. Vincent is touring to support her album that was released two days before this show. Many songs from the album were sung, along with other songs from previous albums. Her new songs seem to be more thought-provoking and intense than her earlier songs. The tour is being called the ‘Digital Witness’ tour, and that was probably my favorite song from the show.

Opening the show was Holly Herndon. I did not enjoy her music, but will listen to her recordings and give her another chance. She has a lovely voice, but her music is too electronic for my taste. She is a doctoral candidate in computer music at Stanford University, so she is clearly impressing people.

When I was waiting to get into the venue, I spoke with three college students on line behind me. One of them said something about being cool; I turned to him and said that since I was just about old enough to be his grandmother, I scored in the coolness category! They thought about that for a few seconds – thinking that their grandmothers would not be seen at a concert like this – and told me I was seriously cool.

I recommend seeing St. Vincent, even if you are the oldest person in the room. Her music will make you think.