← Al Kooper, A Blast From My Past
Amazing Newport Folk Festival Lineup Announcements! →

These are two good additions to the already wonderful lineup.

Lucinda has appeared at the Series once, about five years ago. She put on a good show then, and this one will be even better. Her style is mostly country with some blues, folk and even rock influences.

“The object of cultish adoration for years, singer/songwriter Lucinda Williams was universally hailed as a major talent by both critics and fellow musicians, but it took quite some time for her to parlay that respect into a measure of attention from the general public. Williams released records only infrequently, often taking years to hone both the material and the recordings thereof. Plus, her early catalog was issued on smaller labels that agreed to her insistence on creative control but didn’t have the resources or staying power to fully promote her music. Yet her meticulous attention to detail and staunch adherence to her own vision were exactly what helped build her reputation.”

Tickets for the Lucinda Williams show are priced at $38 in advance (fee-free!), $45 on the day of the show, and children 12 and under are always free courtesy of Eastern Bank. There are also premium seats – beach chairs are provided by the Series – set in two rows directly in front of the stage for $138.  Tickets go on sale Friday, April 11 at 9 a.m. through Lowell Summer Music Series.

Peter Wolf is best known as a member of the J. Geils Band, but in recent years he has had much success as a solo blues artist. I saw him many years ago with J. Geils, and am really thrilled to know I will be seeing him at the Series this summer. 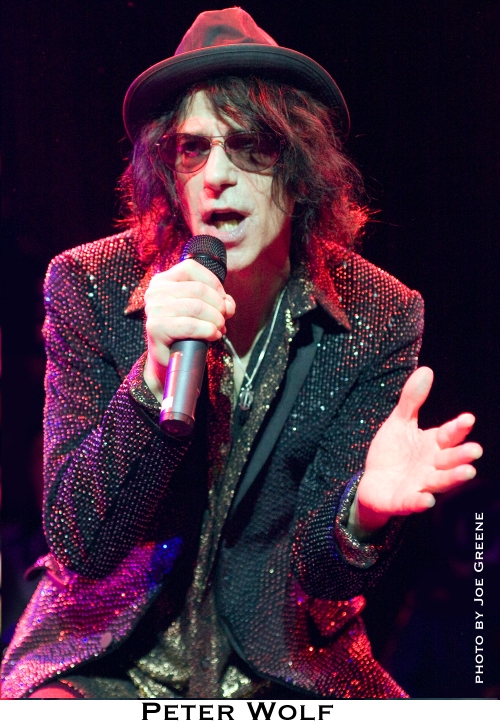 Here’s a bit of Peter’s background:  “Best known for his tenure fronting the J. Geils Band, singer Peter Wolf was born and raised in the Bronx, and came from a family active in show business. In 1984, he released his first solo album, ‘Lights Out’, followed in 1987 by ‘Come As You Are’ which spurred the hit single of the same name. In between albums he worked on duets with Mick Jagger and Aretha Franklin who recruited him specifically for her ‘Who’s Zoomin’ Who’ album. In 1989, after a six-month songwriting retreat in Nashville, he recorded his third solo album, ‘Up to No Good’, which appeared the following year. In 1994, Wolf assembled a group of musicians and began playing clubs as a way to test out newer material on live audiences. It was the live feeling he so successfully captured on ‘Long Line’, his 1996 Reprise release. While on tour in 1997, Wolf met producer Kenny White and together the pair recorded ‘Fool’s Parade’, which was released in 1998 on Mercury. It was selected by Rolling Stone magazine as one of the “50 most influential records of the decade.” In 1998, he toured with the Royal Soul Review, a star-studded gathering of soul artists including Lloyd Price, Chuck Jackson, Sam Moore, Ben E. King, Irma Thomas, Percy Sledge, Gene Chandler, and Jerry Butler. Soon after, Wolf was asked to record with blues great Little Milton. They worked at the famed Muscle Shoals Sound Studios and are featured on the album ‘Welcome to Little Milton’.”

Tickets for the Peter Wolf & The Midnight Travelers show are priced at $39 in advance (fee-free!), $45 on the day of the show, and children 12 and under are always free courtesy of Eastern Bank. There are also premium seats – beach chairs are provided by the Series – set in two rows directly in front of the stage for $139.  Tickets go on sale Wednesday, April 9 at 9 a.m. through Lowell Summer Music Series.

This Series is dear to my heart. I have been a season pass holder since 2007 and it is one of the highlights of the year (and of summer in particular) for me. Many lasting friendships have been made there. I expect this will be an especially excellent year since they are celebrating their 25th season!

← Al Kooper, A Blast From My Past
Amazing Newport Folk Festival Lineup Announcements! →