A Magical Production of ‘The Tempest’

First, let me admit that I’m not an enormous fan of Shakespeare’s plays. I read a few plays in high school that were required reading and have read nothing of his since then. 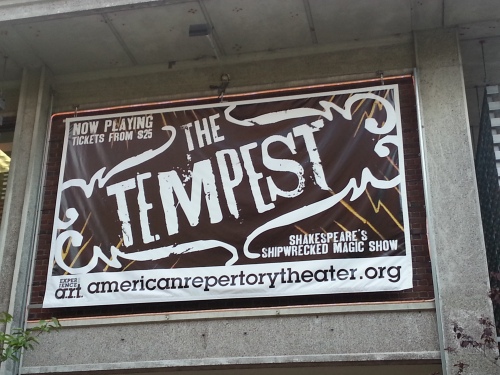 That being said, I loved the current American Repertory Theatre production of ‘The Tempest‘!

I was enticed to go because the music is written by Tom Waits and the magic is done (although not performed) by Teller. Either or both are clearly drawing many people to see the play; hopefully they, like I, enjoyed everything from the acting to the set design to the stage band, Rough Magic.

Shortly before the play began, Ariel the spirit (played marvelously by Nate Dendy) sat at the corner of the stage performing card tricks. He would drop a card and silently ask a member of the audience to return it to him. At one point, he flung a card across the orchestra which landed on me. I obliged him at the urging of the people around me; he kept me at the stage handing me a card for each one I handed to him for a couple of minutes. I loved every second of it!

I have never been to a magic show although I’ve seen Teller on television. I was close enough to the stage that I could have seen any ‘tells’ but I saw none. The sleight of hand worked! I believe in magic!

Most of the magic was performed by Ariel, but Prospero, played by Tom Nelis, added to it.

Caliban is the monster exuberantly played by two actors, Zachary Eisenstat and Manelich Minniefee. They are choreographed by Pilobolus, the dance company that uses the body to produce amazing movements. These two actor/dancers are such a treat to watch! Their strength and grace are incredible.

Everyone is the cast acted well; the other roles and their actors are Miranda by Charlotte Graham, Antonio by Louis Butelli, Gonzala by Dawn Didawick, Alonso by Christopher Donahue, Ferdinand by Joby Earle, Sebastian by Edmund Lewis, Stephano by Eric Hissom, Trinculo by Jonathan M. Kim, and Minion by Christopher Rose.

I loved the music and hope to see some or all of these talented musicians again.

I wish I had read a synopsis of the play before seeing it because it took me about fifteen minutes to feel comfortable with Shakespeare’s language. That was not at all the fault of the actors or directors, however, and it did not spoil my enjoyment of the play.

This production is full of magic, mayhem and music as well as treachery.

The Boston Globe‘s review contains more of a plot summary than this review, as well as a short video.

‘The Tempest’ runs through June 15th – go see it while you can still get tickets to a few performances (as I write this, there are only seven performances which have available tickets). Tickets are available through A.R.T.‘s website.