As If Willie Nelson and Alison Krauss Weren’t Enough…

I had fairly high expectations seeing Willie Nelson for the first time and Alison Krauss and Union Station for (I believe) the second time, and the reality far surpassed them! 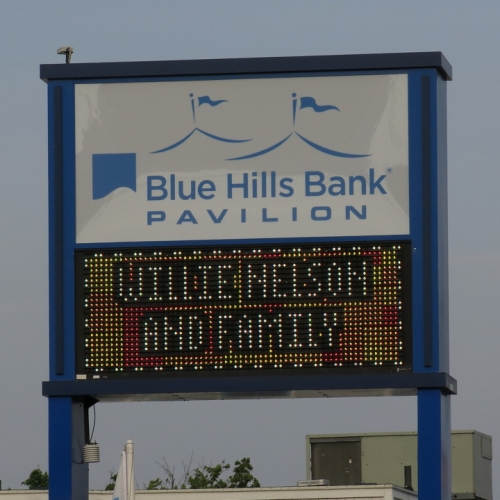 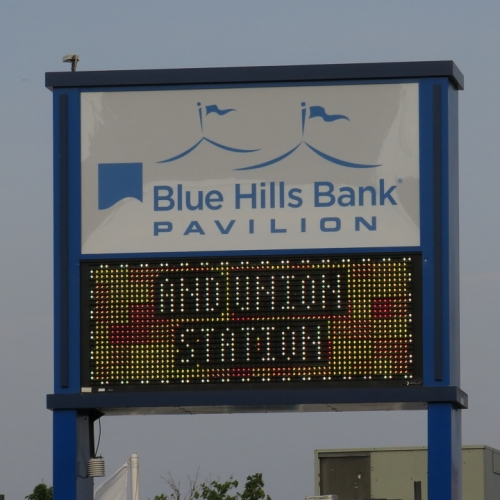 The Blue Hills Bank Pavilion is not my favorite venue (the sound is uneven at best), but even that was not enough to negatively impact the show.

Willie and Family are touring in support of Willie’s first album of new music in a few years; even though the setlist contained several songs from ‘Band of Brothers’, it was Willie’s old favorites that the audience came to hear.

Willie took the stage at 9:30 to a standing ovation and quickly settled into the music, opening with ‘Whiskey River’.  During the entire set, they took no breaks between songs to banter; the only break was when Willie introduced the band, including a friend named Johnny.

Willie may be 81, but his fingers and voice don’t seem to know that. His guitar is clearly well-loved and well-played – there’s a hole in it that comes from many years of hard strumming. His voice is still soft and tender and did not sound significantly different than what I hear on his older recordings. 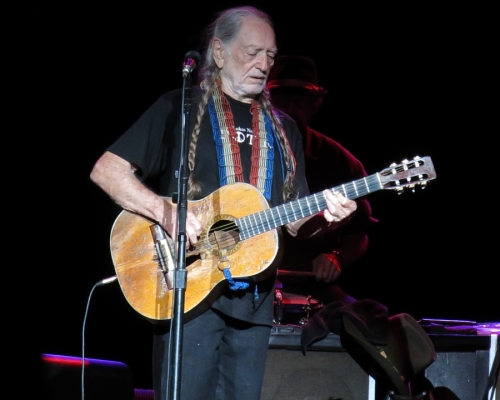 Willie (you can see the hold in the gee-tar)

They performed Stevie Ray Vaughan’s ‘Texas Flood’ on which his guitarist son Lukas starred; that was amazing! I thought Lukas channeled Stevie Ray in his solo.

Other songs on the setlist included ‘Mamas Don’t Let Your Babies Grow Up To Be Cowboys’, ‘Always On My Mind’, ‘On The Road Again’ and ‘Crazy’, as well as a cover of Pearl Jam’s ‘Just Breathe’ that was awesome! 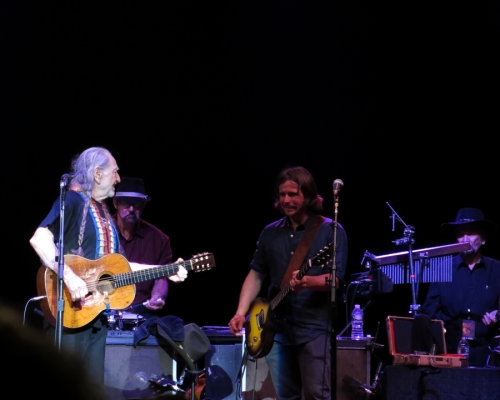 The band comprised Willie’s sister Bonnie on piano, son Lukas on guitar (or should I say gee-tar), son Micah on percussion, Mickey Raphael on harmonica, Paul English on drums, Billy English on snare drum and electric gut string, Kevin Smith on bass, and Johnny on guitar. 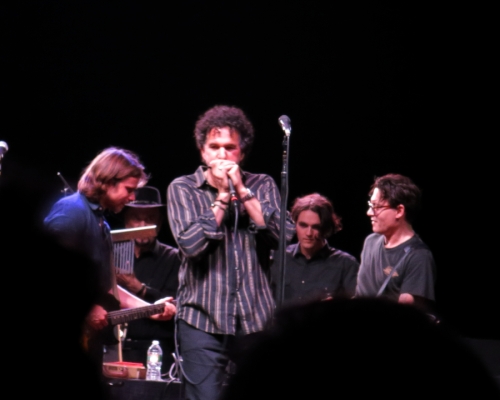 By now you may be wondering why you’ve never known that a member of Willie’s band is named Johnny; that’s because this Johnny was none other than the terrific actor Johnny Depp, who played the entire set with Willie and even had a solo. Lest you think he’s just another pretty face, I’m here to tell you that he’s GOOD! Really good… I’d venture a guess that almost nobody in the audience realized who we were seeing until we read the press the following morning. 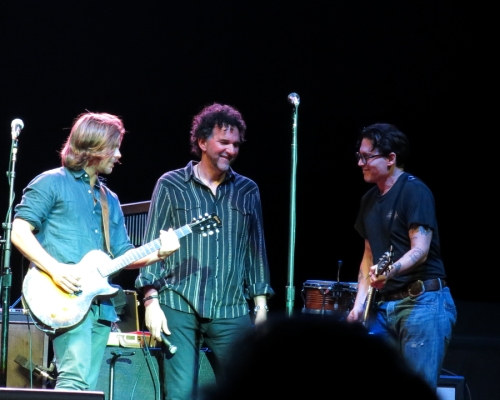 Johnny Depp with Lukas and Mickey

Willie is touring with Alison Krauss and Union Station featuring Jerry Douglas. It is a co-bill, with Alison playing the same length set as Willie (each played 85-minute sets this night). 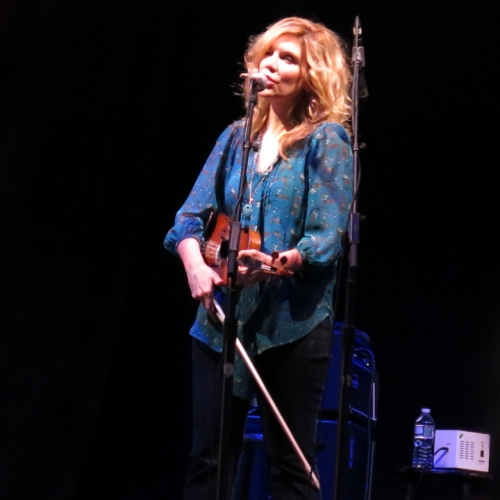 Alison is a fabulous fiddle player and singer who is very comfortable on stage; after all, she’s been performing since she was about 13 years old. She has surrounded herself with some amazing musicians; Barry Bales on bass, Ron Block on guitar, Dan Tyminski on guitar, and Jerry Douglas on dobro and guitar, with all contributing vocals. 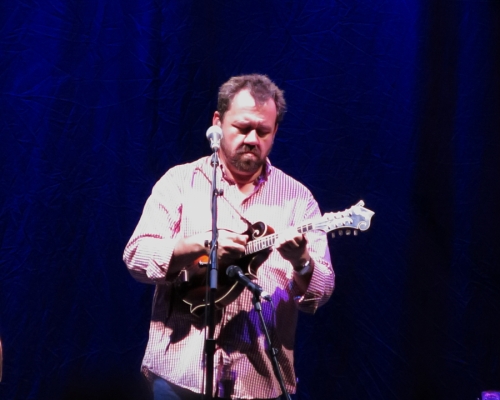 Barry Bales with Alison and Jerry

Alison is happy to share the spotlight with her band members, giving Dan (who was the singing voice of George Clooney in ‘O Brother Where Art Thou’) lead vocals many times during the set and trading instrumental leads with all of her bandmates.

Their set included ‘A Man of Constant Sorrow’ which is one of their iconic songs, as well as ‘Ghost in the House’.

Opening the show was Kacey Musgraves, an up-and-coming country singer which whom I was familiar in name only. I enjoyed her set, even though her style is a bit more mainstream country than I prefer. I enjoyed the song ‘Same Trailer Different Park’ which is apparently one of her hits. 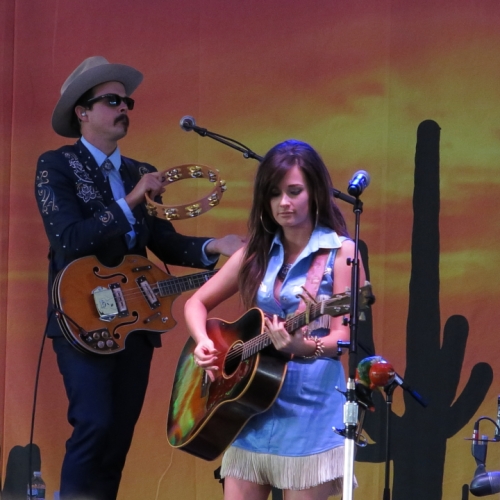 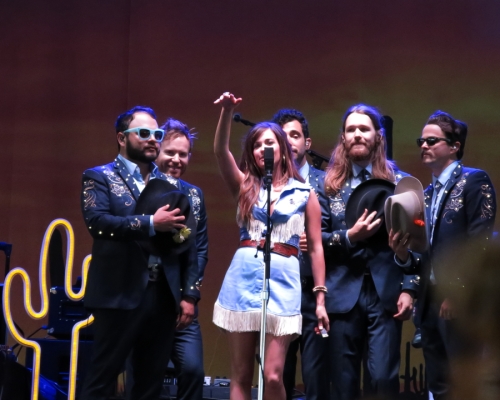 Kacey and her band

The show ended with a four-song medley for which Willie brought everyone to the stage, including Peter Wolf (known as the frontman of the J. Geils Band). The medley started with ‘Will The Circle Be Unbroken’ and continued with ‘I’ll Fly Away’, ‘Roll Me Up And Smoke Me When I Die’ and ‘I Saw The Light’.

What a marvelous way to end a magical evening! The evening was full of music royalty and the blissful faces I saw leaving the venue told me that most people felt the same. 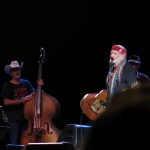 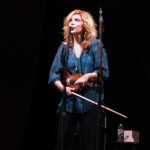 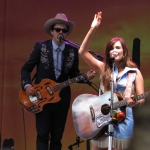 Kevin, Lukas and (probably) a family member who sang with Everyone