← Newport Folk Festival Adds to The Lineup
Funky Jazz or Jazzy Funk? Or Something Altogether Different? →

As soon as I saw that Eric Bibb would perform at Regattabar, I made sure I would be in the audience. Eric lives in Finland and does not tour the United States frequently, which made this a relatively rare appearance.

I first saw Eric perform a couple of years ago when he toured with Habib Koité, one of my favorite Malian musicians; I was familiar with Eric in name only prior to that show, but his performance convinced me to put him on my radar.

The stage this night was set with two chairs and a variety of acoustic stringed instruments; Eric is touring with Michael Jerome Browne, a fantastic blues musician from Montreal who I did not know, who played guitar, 12-string guitar, and mandolin (he had a fiddle on the stage but did not play it).

The music was mostly Delta blues, although they played at least one Blind Lemon Jefferson (Texas blues) song as well as at least one from Eric’s album with Habib, Brothers in Bamako. 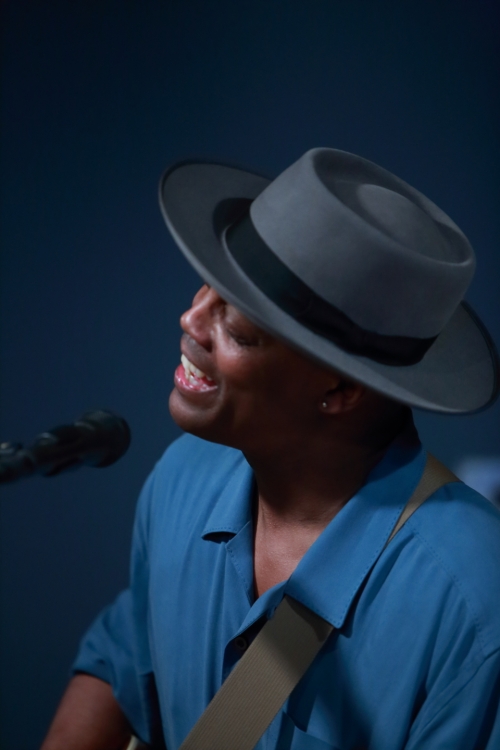 The word ‘troubadour’ suits Eric; he tells stories and imparts history through his songs.

I should have taken notes at the show; unfortunately I do not recall the names of most of the songs they played. Eric released an album last year, Blues People, and played at least several songs from it. The album consists of songs he recorded with many well-known ‘blues people’ such as Taj Mahal, The Blind Boys of Alabama, and Ruthie Foster. There is much history in that collection of songs, and there is much we can all learn from them.

I was very impressed with Michael Jerome Browne, who mostly supported Eric. Eric did ask him to play something of his, so he played a song by Blind Willie McTell.

Calling this a mellow show does it a disservice; the music was so extraordinary that the audience was rapt for the entire nearly two hours. We sang along, clapped with them when encouraged, and had huge smiles on our faces. It was not the largest audience I’ve seen at Regattabar but it was definitely one of the most appreciative.

Eric is a fabulous performer; he relates well to the audience, giving the stories behind his songs and talking of his travels. Regattabar is the ideal venue in which to see him because it made the performance even more intimate.

I will be in the audience next time Eric is in the Boston area; I recommend that you be there too!

← Newport Folk Festival Adds to The Lineup
Funky Jazz or Jazzy Funk? Or Something Altogether Different? →