← Huge News From No Depression!
Final Show Announced For The 2015 Lowell Summer Music Series And It’s A Winner! →

Brian O’Donovan is bringing his A Celtic Sojourn roots and branches show to the Lowell Summer Music Series on Saturday, August 22! I have seen Brian, but have never seen Cherish the Ladies, one of the featured bands at this show.

“WGBH Radio host Brian O’Donovan will present A Celtic Sojourn Roots and Branches Concert featuring a range of traditional and contemporary artists from around the Celtic World in what promises to be one of the highlights of the series and indeed a highlight of the summer’s Celtic calendar in New England. 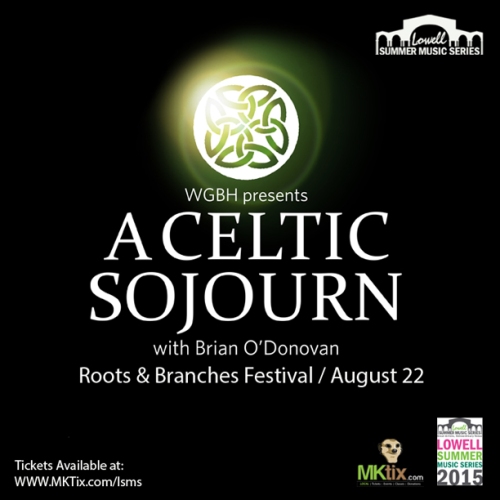 “Local, regional, and national broadcasts of O’Donovan’s radio program, A Celtic Sojourn over the past 28 years have proven extraordinarily popular. This concert will follow the format established for the still growing Christmas Celtic Sojourn series of concerts which, during this past December, played to over 12,000 people in the area, and A St. Patrick’s Day Celtic Sojourn which in 2015 expands   from its multiple shows in Cambridge, to New Bedford and Worcester.  This year, he also will host two concerts with Keith Lockhart and the Boston Pops, as well as producing and hosting the hugely successful ongoing Burren Backroom Series in Somerville.”

Tickets for A Celtic Sojourn are priced at $37 in advance (fee-free!), $40 on the day of the show (if available) and children 12 and under are always free courtesy of Eastern Bank. There are also premium seats – beach chairs are provided by the Series – set in two rows directly in front of the stage for $137.  Tickets are on sale through Lowell Summer Music Series.

← Huge News From No Depression!
Final Show Announced For The 2015 Lowell Summer Music Series And It’s A Winner! →