← What Is Hip? Tower Of Power, That’s What!
Matuto Is No ‘Country Bumpkin’ →

Gorgeous Evening Of Acoustic Music Under The Stars

Boston’s Museum of Fine Arts presents a summer concert series that is held – weather permitting – in the courtyard in the middle of the buildings, and it is one of the best ways to spend a summer evening I know.

This week’s headliner was Sam Lee, a British traditional music specialist who is touring the United States for the first time.

He took the stage sporting bare feet, something he remarked later might not have been the wisest thing to do while dancing on concrete! I hope he did not shred the soles of his feet…

Each song was presented with a story about it; how he found the song, who originated it (either the individual who wrote it or the ethnic group who traveled with it), or what the song meant to the history of England, Scotland, and Ireland.

Lee is an ethnomusicologist in the same way Dom Flemons is one. They merely study different ethnicities. He has an extremely engaging performance style as well.

He is touring to support the release of his latest album, The Fade in Time.  There is something about many of the songs that remind me of being on a sailing ship. I do not know if they are truly sea shanties, but they evoke that image for me.

Lee performs all the lead vocals and also played the Jew’s harp. While I frequently find the sound of a Jew’s harp dissonant, in Lee’s capable hands (and mouth) it suited the music perfectly.

Lee had three terrific musicians with him; Flora Curzon on fiddle, Jon Whitten on keyboard, ukulele and Mongolian dulcimer (who knew there was such a thing), and Josh Green on percussion (including a calabash which was unfortunately hidden from my view). All provided some harmonies as well. 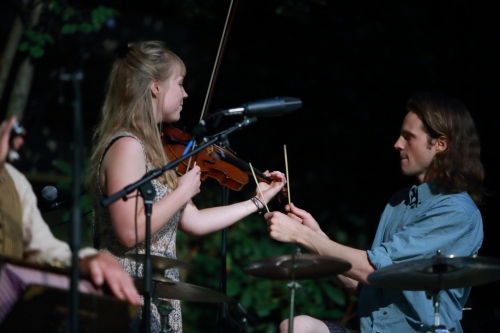 The set flowed and I felt lost in the music, which came to an end all too soon. 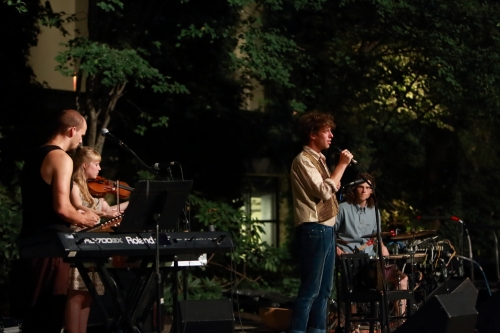 Opening for Lee was Birds of Chicago, a trio (at least on this evening) performing “rock n roll poetry”. 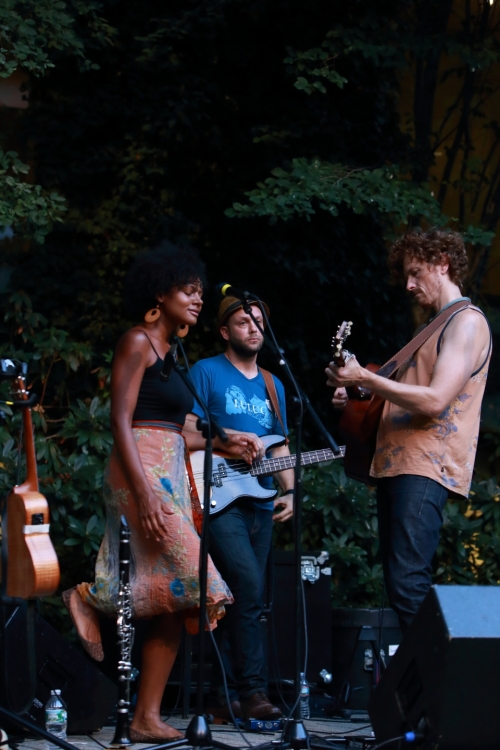 JT Nero on vocals and guitar; Nero’s wife Allison Russell on vocals, clarinet, banjo, ukulele, and guitar; and Chris Merrill on electric bass comprised the band. Nero and Russell write most if not all the songs.

These Birds were serenaded by a chorus of real birds that were fluttering in and out of the ivy-covered walls of the courtyard. That added to the dreamy atmosphere of their performance.

Sam Lee is touring with Patty Griffin in the fall, and luckily I have a ticket for that show! The Boston show is sold out, but other cities have availability. I highly recommend seeing one of the shows if you can. I know I will be seeing Birds of Chicago at the Freshgrass Festival in September!

← What Is Hip? Tower Of Power, That’s What!
Matuto Is No ‘Country Bumpkin’ →