Classic Rockers At Their Finest!

It can be risky to see aging rock stars perform; they might be playing guitar with arthritic hands, or their voices (which naturally change as they age) cannot hit the notes they still try to hit. Neither could be further from the truth for Peter Frampton, who appeared at the Lowell Summer Music Series last weekend.

The man is ageless!

This was a triumphant appearance, the last on his current tour supporting the 40th anniversary of his Frampton Comes Alive album. His band members were overheard saying that Frampton had been on fire that night, and I agree.

If he had trouble hitting notes, he had some extremely able singers who harmonized with him to create his iconic sound. His guitar-playing in incredible; this was my first time seeing him live, but his fingers slid across the strings as if they were an extension of his hands. I am not sure I knew how good an instrumentalist he is.

His band is Dan Wojciechowski on drums, Rob Arthur on keys (and guitars), Adam Lester on guitar, and Paul Peterson on bass. Rob and Adam also provided vocals. Some have played with Frampton for years, and the chemistry is apparent. 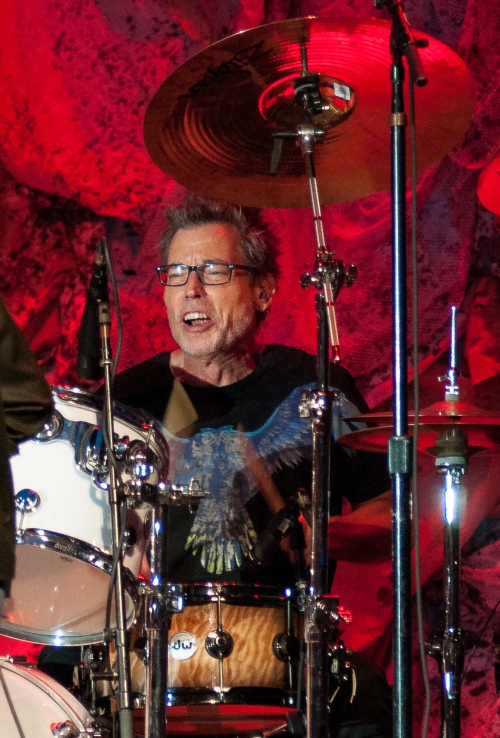 While it may have been hard to reconcile the vision of this man with short white hair with the 30-year-old with long, curly brown locks (as my friend said to me), his performance negated that. He moved around the stage with a certain grace that belied his years. He may not be leaping these days, but the show had all the energy his shows have most likely always had.

Needless to say, they received a standing ovation, and returned to the stage for an encore consisting of three songs. The last was George Harrison’s ‘While My Guitar Gently Weeps’; we gladly accompanied the band when Frampton asked that we do. Sadly, there was no second encore although I do not know how they could have topped what they did.

Opening the show was a young British blues man named Jack Broadbent who was touring with Frampton.

Appearing with only himself and a lap slide guitar, he captured the crowd’s attention from his first notes. Armed with an excellent voice, a dry wit, and great slide work, his brief set contained both original songs and covers (including Hendrix).

I bought his album and look forward to seeing him again in the near future.

This was as close to a perfect evening as happens to me, on many levels. The music was fabulous, the weather ideal, and I was able to share the show with a dear friend (well, more than one).

Thanks to Tim Carter for the use of his photos to help tell the story. I am grateful.