Intimate Interview and Performance with Dwight Yoakam at AmericanaFest

I first saw Dwight Yoakam perform last year and loved him much more than I expected. When he was added to the Americana Music Association Festival & Conference lineup, I was thrilled! And when I got the email announcing an interview and live performance by him in an intimate theatre, I knew I had to attend. 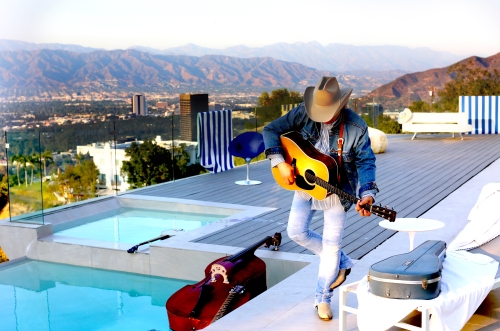 The format for this event was part interview, part broadcast of songs from the then-forthcoming album Swimmin’ Pools, Movie Stars. I knew nothing about the album other than it was a departure from Dwight’s usual style.

What they did was re-create eleven of Dwight’s older songs as bluegrass tunes, and the result is magnificent. These songs sound completely different than the way they were originally recorded, but the constant is Dwight’s mellifluous voice. I almost forgot how beautiful it is.

The quality of his voice was certainly highlighted by the fantastic sound system in the Ford Theatre at the Country Music Hall of Fame and Museum, a 213-seat theatre within the museum. Sight lines are excellent regardless of where one sits, and the acoustics are great (it did not matter whether the music was live or recorded, everything sounded gorgeous).

Dwight was asked about the recording of Prince’s “Purple Rain”. The band was in Nashville recording the album, and on the third day of recording they awoke to the news that Prince died that morning. They stumbled into the studio in a state of shock, wondering how they could honor his memory. Without serious rehearsal time, they recorded “Purple Rain” as a bluegrass song. As Dwight told this story, I had tears in my eyes as did many others in the audience.

The album was released on September 23rd, and the first song released was “These Arms”.

Anyone who is a fan of bluegrass music generally or of Dwight must buy this album. And really, all music lovers should own this music. If you own a turntable, buy it in vinyl– it is pressed on swimming pool blue material! Even though I have the CD, I think I will buy the vinyl.