A crowd favorite returns for his fifth appearance at the Lowell Summer Music Series – Lyle Lovett and His Large Band will appear on Saturday, August 12th! I have seen all his previous shows and this is a show not to be missed!

“A singer, composer and actor, Lyle Lovett has broadened the definition of American music in a career that spans 14 albums over three decades. Coupled with his gift for storytelling, the Texas-based musician fuses elements of Americana, swing, jazz, folk, gospel and blues in a convention-defying manner that breaks down barriers. 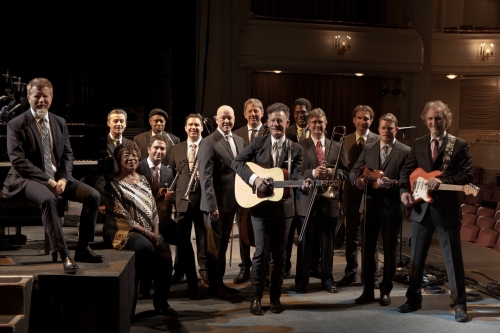 “Whether touring as a Duo or with his Acoustic Group or The Large Band, Lovett’s live performances show not only the breadth of this Texas legend’s deep talents, but also the diversity of his influences, making him one of the most compelling and captivating musicians in popular music. Since his self-titled debut in 1986, Lyle Lovett has evolved into one of music’s most vibrant and iconic performers.

“Among his many accolades, besides the four Grammy Awards, he was given the Americana Music Association’s inaugural Trailblazer Award, and was named Texas State Musician. His works, rich and eclectic, are some of the most beloved of any living artist working today.”

Tickets for the Lyle Lovett show are priced at $53 in advance (fee-free!) and children 12 and under are always free courtesy of Eastern Bank. There are also premium seats – beach chairs are provided by the Series – set in two rows directly in front of the stage for $153. Tickets for this show go on sale on Thursday, March 23rd at 9 a.m. through Lowell Summer Music Series.