← Is The Music Disturbing Your Conversation?
A Fundraiser For Your Consideration →

I had the opportunity to cover a fabulous show recently at The Chevalier Theatre On Stage! Series at which the members of all three Americana bands are friends! I have seen each band perform a number of times, but this triple bill was a rare chance to see them in one show. 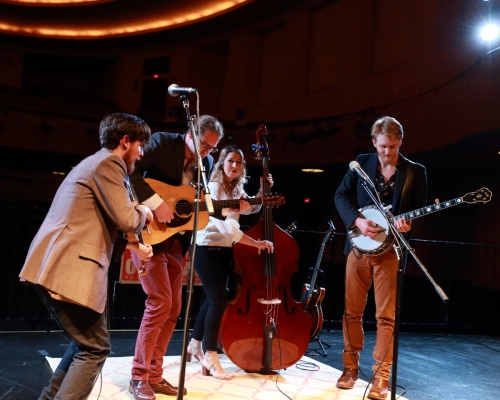 This Series is unique; the 100-member audience sits on the stage at tables seating four, facing the auditorium and the band which is also on stage. It is an intimate way to see a show. 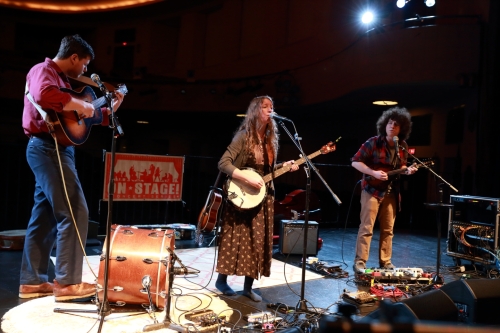 This was an evening of Americana music featuring Damn Tall Buildings, Honeysuckle, and Aurora Birch. These musicians may be young but they are well on their way to becoming household names in roots music circles. Most if not all of them are graduates of the Berklee College of Music and at least for the time being chose to remain in Boston to continue making music.

The show began with a solo performance by Aurora Birch. She played a warm-sounding hollow body electric guitar and sang her original songs.  Although she did not play one at this show, she also plays keyboards.

Referred to as a rootsy songstress, she is able to stand alone on a stage getting her message to everyone in the audience. Her upcoming album will be full band, and I believe her songs will stand up to that.

Next to the stage, with no break between sets, was Honeysuckle. This trio is Holly McGarry on guitar (sometimes banjo) and lead vocals, Benjamin Burns on banjo, kick drum (sometimes guitar), and vocals, and Chris Bloniarz on mandolin and vocals. 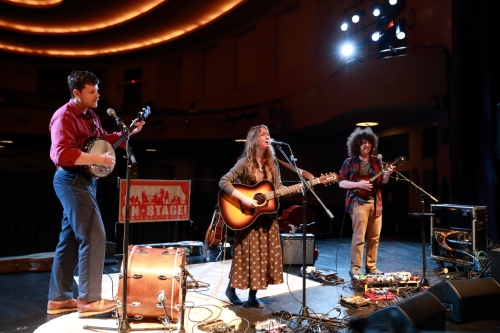 Playing progressive folk, they write and perform some fairly dark songs yet I do not feel down after I hear them. They all are songwriters; some are written alone and others are collaborative efforts.

Holly has a lovely alto voice that captivates unsuspecting audience members from her first notes (as she did with my friend who had never seen them until that night). Ben impresses me with his ability to play guitar, pound out a rhythm with his foot, and sing, all at the same time. Chris is a dynamic mandolin player who is fun to watch and is as talented as he is fun.

Their first full-length album was released around a year ago and they are working on their second album. I am excited for that!

Last to the stage after a short intermission was Damn Tall Buildings, a bluegrass band of a style that I generally call bluegrass-on-speed. They are damn fine proponents of that style. Their Facebook page called them an all-acoustic guerilla roots band and that is accurate as well.

Avery ‘Montana’ Ballotta on fiddle, Max Capistran on guitar, Sasha Dubyk on bass, and Jordan Alleman on banjo, with all contributing vocals, comprise the band. They move around the stage a lot – well, all except Sasha since it’s difficult to dance around with an upright bass – playing off one another and generally having a grand time. It is evident that they love what they do.

I was doing a lot of chair dancing during their set (in between taking shots)!

They too are working on a new album that will hopefully be released this year. I look forward to that.

I hoped they would play together for an encore but they did not. Maybe next time! These are three fabulous bands (eight musicians) that should be creating much excellent music for many years. They all have the fire in their bellies that makes it likely they will.

While you may not have the chance to see all three bands at the same show, they perform in the Boston area often and tour nationally as well. See them together, separately, however you can – but see them!

Thanks to the Chevalier Theatre for the ticket; all opinions are my own.

← Is The Music Disturbing Your Conversation?
A Fundraiser For Your Consideration →