Club d’Elf is an amazing ensemble that never seems to consist of the same members twice! I’ve seen them three times so far, and the only musician who has performed in all three shows is Mike Rivard, the bass and sintir player.

It is difficult, if not impossible, to describe Club d’Elf’s music in one word – other than fabulous!The music is basically anything that invokes a trance. The roots are found in jazz, hip-hop, progressive-rock, and electronica, as well as world music, and probably other styles. Mike Rivard usually plays a sintir at some point during the show; it is an African stringed instrument that looks as if it could be an ancestor of the bass. 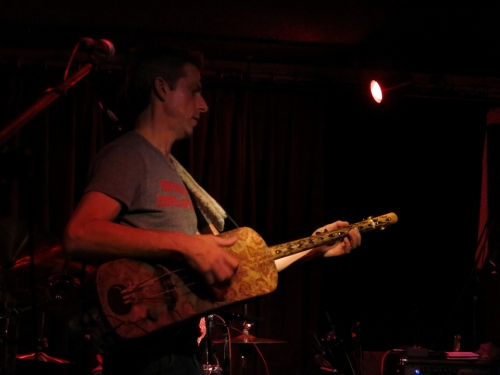 Last night, the ensemble consisted of Mike Rivard on bass and sintir, Tom Hall on saxophone, Mister Rourke on turntables, Dean Johnston on drums, Vicente Lebron on congas and percussion, and special guest Roger Miller (of Mission to Burma fame) on keyboard and ‘effects.’ All are fabulous musicians who took solos during the sets. The stage was fairly dark, so my photos are limited. 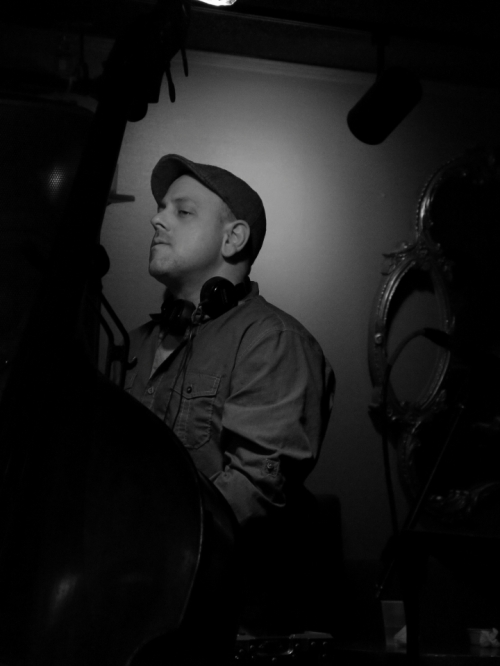 The first set was one number, an hour and 45 minutes long! They do not play songs, but rather perform music. Other than what came off the turntable, there was no singing.  The music transported me to a different place – hence, trance music. I closed my eyes and let myself go.

Mike has an interesting cache of equipment he adds to his bass to produce different sounds. Last night, he wove what I presume was a drum stick over-and-under the double bass strings and also attached some little clips (electrician’s clips, possibly) to the strings of the electric bass. What makes someone think to do this? (That’s a rhetorical question – as a potter, I know what it means to pick up something to see what effect it has on your medium.)

The clips on the strings of the electric bass

Club d’Elf has a residency at Lizard Lounge in Cambridge – usually every other Friday night. This is a really interesting club. It’s quite small – I believe 85-100 person capacity – but has an amazing beer list for its size. The sound system is surprisingly good. The stage is open on three sides, so you can see something from every side. It might be a view of one musician’s back but another musician’s face.

If anyone is interested in listening to the show, here’s a link to the recording:  Club d’Elf Live.

I will be back to see them soon because every show is unique.