A Bugg You Won’t Want to Squoosh!

We bought tickets to Jake Bugg‘s show at the House of Blues as soon as they went on sale; last time he was in Boston, he played at a much smaller venue and sold that out fairly quickly. We didn’t want to be left out of this show. 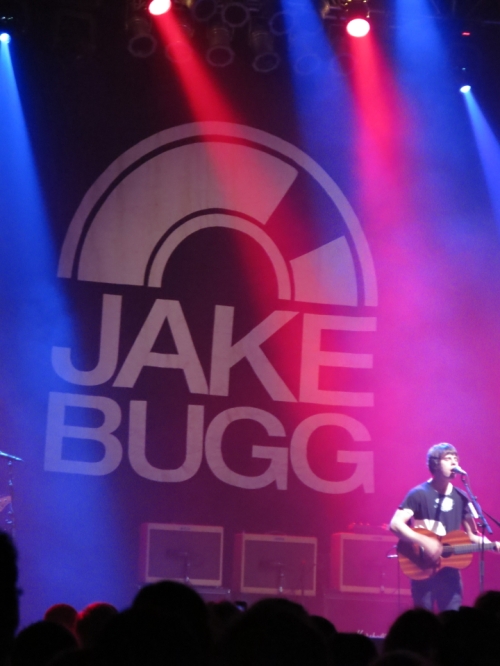 And what a show it was! Jake is a young (19 years old) talent who has tremendous stage presence for his years.

There were two opening acts this night.  The first was The Skins, a band of young musicians from Brooklyn, New York. Three are siblings – Bayli Mckeithan is the lead singer, Kaya Mckeithan is on bass, and Reef Mckeithan is on drums – and the others are friends Daisy Spencer and Russell Chell on guitars.

The Skins – Bayli and Kaya

Bayli was fun to watch as she engaged the audience – or at least tried to. She faced an uphill battle because the crowd was clearly there to see Jake. I enjoyed the 20 minutes of their set I saw (the start time on the venue’s website was not accurate; had it been, we would have caught their whole set).

Next up was Albert Hammond Jr. who played for about 45 minutes. He, too, faced an uphill battle with the crowd, but he seemed to cease trying to engage the audience when it was obvious the people at the rail were only interested in Jake. It’s their loss – I liked his set quite a bit. Albert is a very good rock guitarist and I loved listening to him sing.

Jake finally took the stage at 8:15 to the delight of the crowd. Judging by the shrieking I heard throughout the show, there were many young women and girls (it was an all ages show) at the rail. The screaming reminded me of what happened at Beatles’ shows in the 60s.

Jake engaged the crowd from the second he stepped onto the stage. People knew his music and sang along with him.

His band is three pieces – guitar, bass and drums. The stage at the venue is large, and they spread out much more than was needed.  I would have liked to see Jake engage with his bandmates.

He started the set with an acoustic guitar and switched among a number of guitars throughout the 80-minute set. When he did a couple of solo acoustic songs in the middle of the set, the audience’s attention seemed to wane, but that picked up again when the band returned to the stage. 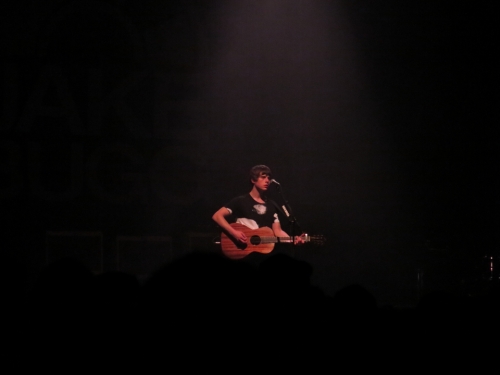 I appreciated that Jake didn’t gyrate or act in a seductive manner – for me, that would have detracted from his music and he obviously takes that quite seriously. The crowd loved him regardless.

I’m glad I saw this show. I predict he’ll be at the Newport Folk Festival soon. I also predict that he’ll be playing larger venues, which won’t suit his music as well.