← This Riff Raff Is Everything But!
The Acoustic Poetry of We Are Baker →

I may be a bit biased when it comes to Laney Jones and the Spirits because they are friends, but I watched the reaction of the audience at the Extended Play Sessions where they performed on Friday night and saw that everyone in the room was as enthralled with this band as I am. Phew!

You may wonder what ‘retro majestic indie rock’ (Laney’s self-description) is; my answer to that is that you should listen to the band’s new music which is not yet out on an album. Here’s a video of one of the songs performed at this Session.

Laney Jones is a young (early 20s) woman from Florida whom I met when she auditioned at Berklee College of Music a few years ago. She shyly gave me a copy of her demo CD; as soon as I heard her fabulous voice, I knew she would have a great career in music.

I am not the only person who thinks that.  Laney participated in a master class with Alison Krauss at the Kennedy Center in DC, and Alison told her that “You got it going on and I can’t wait to see what you’re gonna do next!”  You can view a documentary about this experience that aired on the PBS series Great Performances.

Laney was self-taught on the banjo, ukelele, harmonica, and voice before she entered Berklee but she obviously has a natural talent for those instruments (I, as well as many others, consider the voice to be an instrument). Her playing has only improved through the tutelage of Berklee’s fine roster of teachers and also as a result of performing more gigs. 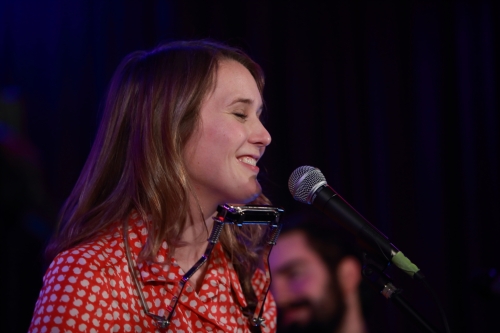 The Spirits are Matthew Tonner on guitar, Curtis Seligson on bass, and Alex Shames on drums, with all providing vocal support. This is a relatively new configuration of the band, but I have a feeling it will remain this way for a while. They are all accomplished musicians who genuinely appreciate and support each other’s talent.

Laney does most of the songwriting for the band, and her wit is evident in many of her songs; ‘Black Coffee’, ‘Homemade Shine’, and ‘Midnight Snack’ are several of her wittiest tunes. I do not know her newest music as well as I know her older music, but I expect that will change this fall when their new album is released. Then I will describe the wit of her new material!

The music has a base in traditional folk, bluegrass, and Americana, but they have used that base to create a unique sound. I like ‘retro majestic indie rock’ to describe them.

I expect that Laney Jones and the Spirits will be a force with which to be reckoned in the not-too-distant future.  This band epitomizes what is right in the music business; that a fresh spin on a solid base can deliver an experience that one will not soon forget. Keep it going, Laney, Matthew, Curtis and Alex!

← This Riff Raff Is Everything But!
The Acoustic Poetry of We Are Baker →