The Spirit of Hank Williams Lives!

Girls Guns and Glory, a Boston-based country band, is riding high these days due to the justifiably great press its Hank Williams tribute album (and the shows dedicated to that album) is receiving. The Extended Play Sessions hosted them for a more-than-sold-out session last week and they brought their A game for this Hank Williams tribute performance.

The band performs original songs as well, and until recently had performed the tribute shows only about a half-dozen times per year. I was lucky enough to see one of the traditional New Year’s Day shows so I knew how good this show would be.

The members of the band are Ward Hayden on guitar and lead vocals, Chris Hersch on lead guitar, Paul Dilley on bass, and Josh Kiggans on drums, with all providing backing vocals to Ward. In addition, Jason Anick frequently performs with the band on fiddle, as he did at this show.

Ward has a gorgeous voice; based on the songs I have heard Hank Williams sing (on obviously old recordings), Ward stays true to that legacy. He explained that what the band is doing is making Hank’s songs their own, although some are performed in similarly to the way Hank did.

Some of the songs they perform are well-known to even a casual listener of Hank’s music – ‘Hey Good Lookin’, ‘Your Cheatin’ Heart’, and ‘I’m So Lonesome I Could Cry’ (even though the last is a song many people associate with Elvin Presley without knowing it was penned by Hank).  They sang a rousing version of ‘Jambalaya’, which I did not realize was written by Hank until I saw the New Year’s Day show! I think everyone in the audience was singing the chorus right along with Ward! 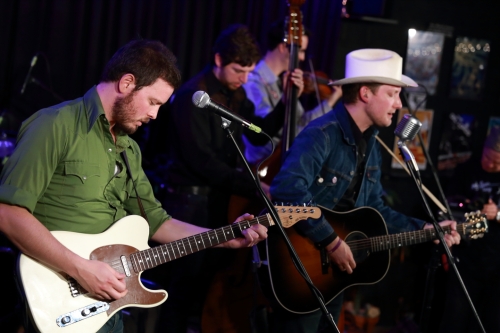 The band has been together in its current configuration for about six or seven years, and their musical chemistry shows. Ward and Chris make a lot of eye contact during their performances, and feed off each other’s (as well as the rest of the band’s) talents.

GGG is a band that needs to be experienced live (to be honest, I feel that way about most bands). They have an energy that pours off the stage and into the audience, drawing them into their aura. I walk away from GGG’s shows needing a cowboy hat and cowboy boots!

I believe GGG is on the cusp on becoming a major force on the national music scene (there was a review in Rolling Stone that is helping catapult them into prominence). See them while you can in smaller venues; I doubt you will be disappointed.