This is an incredible announcement from the Lowell Summer Music Series! Appearing in his début at the Series on Thursday, June 14th is David Crosby! I have seen him a number of times both solo and with Crosby Stills & Nash and Crosby Stills Nash & Young and he never disappoints. Last summer the Series had Graham Nash and Stephen Stills, this year Croz! Maybe next year Neil Young???

“At an age when many artists are slowing down, David Crosby is speeding up!

“When Crosby released Croz in 2014, it had been two decades since his last solo album. But in 2016, only two years after that robust, full-band effort, the 75 year old returned with Lighthouse, an intimate, stripped-down set that highlights Crosby’s instantly recognizable voice, incisive songwriting, and incomparable guitar work. 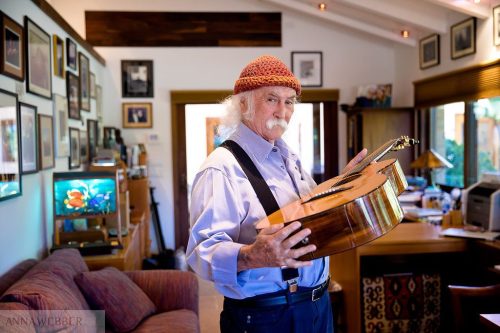 “Lights twinkle, flicker, blaze and sparkle throughout David Crosby’s finest solo album since his melancholy 1971 masterpiece, If I Could Only Remember My Name “ – Rolling Stone

“Crosby’s new masterpiece Sky Trails was released in September 2017. Produced by James Raymond, the album features a new collection of original songs including writing collaborations with Michael McDonald, Becca Stevens & James Raymond as well as a re-imagining of a Joni Mitchell classic.

“Two-time Rock and Roll Hall of Famer and co-founder of the Byrds and Crosby, Stills & Nash, David Crosby, is heading out on tour. Joining him will be five exceptionally talented musical friends, James Raymond on keys, Mai Agan on bass, Steve DiStanislao on drums, Jeff Pevar on guitar and Michelle Willis on keys and vocals.

“Crosby is in the midst of an incredibly creative and powerful period and on this tour, he will be performing music from his new album Sky Trails alongside some of his best loved songs and greatest hits.

“”David Crosby and his friends put on an awesome show. It was not full of glitz and glam, no fancy laser light show or costume changes, but it was packed with spot on quality, superb harmonies and awesome musicianship. Crosby’s voice was as smooth as it has ever been and he was warm and charismatic.” -Shutter 16 (Review from The Westbury Theater May 23rd 2017)”

“Chris Hillman is the kind of free only earned by having nothing left to prove. “It was a passion,” Hillman says, reflecting on his early years with a guitar, mandolin, and bass. “I had this passion to embrace the music and learn it, never really thinking, ‘I’m going to be a huge star.” I didn’t think that way at all.”

“Hillman is the co-founder of Rock and Roll Hall of Famers the Byrds, as well as the Flying Burrito Brothers, Manassas, and the Desert Rose Band. His new album Bidin’ My Time – produced by Tom Petty – puts that pedigree on ferocious display. Bidin’ My Time is an understated but undeniable masterpiece, relevant, layered, and bright. Folk, rock and roll, bluegrass, and the unmistakable country-rock Hillman helped pioneer come together seamlessly on songs written by Hillman and his peers in the 60s or in the last few years. Collaborators and admirers from Hillman’s storied career appear throughout the record, some as the album’s backing band, others in winking cameos. In addition to Petty, Bidin’ My Time features Hillman’s Byrds bandmates David Crosby and Roger McGuinn; the Heartbreakers’ Benmont Tench and Steve Ferrone; Desert Rose Band’s John Jorgenson and Pedersen; giants Jay Dee Maness and Mark Fain; the Shelters’ Josh Jove; and the Punch Brothers’ Gabe Witcher.

Tickets for the David Crosby show are priced at $54 in advance (fee-free!). There are also premium seats – beach chairs are provided by the Series – set in two rows directly in front of the stage for $154. Tickets for this show go on sale on Friday, March 2nd at 9 a.m. through Lowell Summer Music Series.