One of the things I love most about owning this website (although I honestly love EVERYTHING about owning it) is that I am introduced to artists I might never come across.  Canadian David Myles is one of those artists. 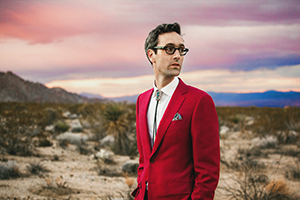 I do not always receive music that I thoroughly enjoy as much as I enjoy Myles’ album.

Myles is an Americana artist, combining elements of rock and roll, rockabilly, country, and just about any roots music genre you can imagine.

Below is the press release for Real Love. This is another album that is worth your time and money!

“Last week, the video for the single “Look At Me” premiered at The Big Takeover, who describes it as, “jauntily upbeat.” The video was shot at Joshua Tree National Park in California and features Myles performing in his patent leather shoes and bolo tie. Earlier, the album’s first single “Real Love” debuted at Magnet Magazine.

“The 13-track LP marks Myles’ tenth album and his second full-length U.S. release. Written entirely by Myles and produced by Daniel Ledwell, Real Love is a departure from his previous record in that it is fully electric. It features members of his touring trio—Kyle Cunjak on bass and Alan Jeffries on guitar—plus Joshua Van Tassel on drums and additional vocals by Mahalia and Reeny Smith.

“A native of New Brunswick, Myles was brought up practicing Canada’s Royal Conservatory repertoire on trumpet. After earning a political science degree and briefly pursuing politics, Myles deviated. During his third year in college he bought a $30 plywood guitar while studying Chinese abroad and changed course from law school to music. Since then he has recorded ten albums, accumulated numerous accolades in his home country and built a dedicated live following where, in addition to his songwriting and musicianship, he is widely recognized for his signature suits and animated stage presence.”