← Gangstagrass Blew The Roof Off Hill Country BBQ!
The Summer of 2019 – The 30th Anniversary Of The Lowell Summer Music Series – Starts Well! →

I was devastated by the news of Mike Ledbetter‘s untimely death at the way-too-young age of 33 last week. My heart breaks for him, his family and friends. I am fortunate to have been able to call him a friend… 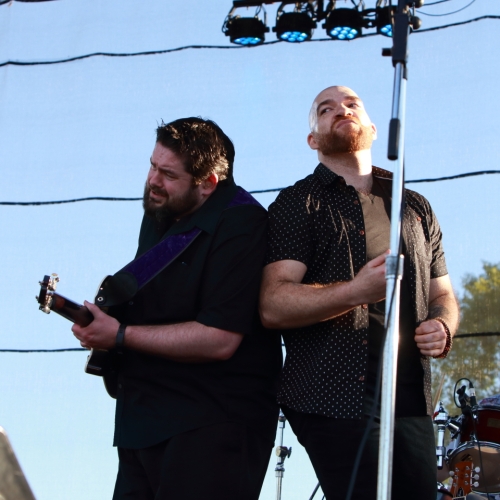 The first time I saw Mike perform was at Carnegie Hall during a tribute to Leadbelly (who was a distant relative of Mike’s) and was awestruck. I met him that night at the after-party and was immediately struck by his warmth and humility. That feeling only strengthened the more I saw him and talked with him. 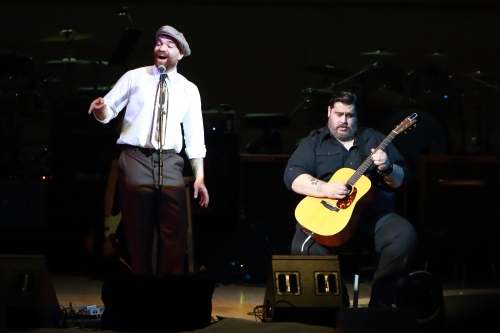 Not quite two years ago, he and Mike Welch connected to form the Welch-Ledbetter Connection and what a connection that was! The chemistry, both musically and personally, shared by Mike and Mike was palpable and intensely strong. I am not sure I will ever see such a strong bond between artists again… They were truly brothers in all respects.

I would like to share this missive written by Nick Moss, his friend and bandmate for many years.

“Most of you know Mike Ledbetter as the incredible talent that he was. All were touched by his immense personality and his supernatural abilities on stage. Some privileged few got to know his love and friendship, and his humor and playfulness. I am still absolutely numb and shocked to have lost a family member. He was more than a friend and bandmate…we were truly brothers. I have no words to describe my pain and sorrow. I can’t stop thinking about his children and his soulmate, Kathy Cahoon. His parents, Pam Kolb Ledbetter and “Big” Mike Ledbetter, and his sister Ginger Davies Burroughs are like family to me too, and my heart aches for them all.

“I first met Michael through my wife, Kate Moss. Kate had seen him perform with the Kilborn Alley Blues Band while sitting in one night and was blown away at his vocals enough that she invited him down to my show the following week. She asked him if he knew who Nick Moss was, and he responded that he was a big fan and had a few of my CDs. We were playing at Rosa’s lounge when Kate pointed out “her discovery” to me. I’m usually hesitant to invite guests on stage that I’m not familiar with, but Kate assured me that he was more than competent. When I called him to the stage he looked so nervous and I thought to myself “this isn’t going to go well”, I asked what he wanted to sing and he called out one of my own songs (the balls on this kid!!!) when he came in with the vocals he brought the house down!!!!!! We finished and I asked if he’d like to do another, so he called off a Magic Sam number and killed it again! It was at this point I had to get him off the stage cause he was stealing the show!!!!! I remember asking for his number at the end of the night, and he was so surprised that I would want to call him. I found out he lived less then a couple miles from our house. When I called him a week later to hang out his voice was trembling, and he sounded like he thought I was joking. We wound up hanging out a bunch that first month, he kept calling me “Mr. Moss” and I finally told him, “look I have fans and this isn’t an appointment for a bank loan…we’re friends now, just call me Nick!!” He loosened up, and awkwardly called me Nick, but then just started calling me “boss” and it was the name he called me to the end.

“In the following months I tried to hook him up with other musicians and bands around town, hoping they would see the raw potential he had. It seemed that no one else could sense it. I had always done my own vocals, so I wasn’t looking for a vocalist but I’d let him sit in from time to time. It was on the “Here I Am” session that I realized I need some good background vocals for a couple songs, and he had been hanging around the studio watching the process of recording, so I asked if he’d like to contribute some backgrounds. Mike jumped at the chance to do it and was smiling from ear to ear when I asked! The first song was “Candy Nation” and he was so impressive with his precision and professionalism and his range and ability I was floored. The next song was “ It’ll Turn Around”…this was the moment everything changed for me. He sounded so wonderful and completely changed the dynamic of the performance! At the end of the song there is some riffing and call backs, I asked him to improvise something, and he put down a nice part, but I knew he had something else in him so I asked him (very politely) to “sound a bit more urban, give me some gospel shouting” he said over the microphone from the vocal booth “you mean slap some black on it?!!” We all fell out laughing…but when he did the next pass he made my hair raise and I sat in awe of what I had just witnessed!!!!! As soon as he was done he asked “how was that?” I said “can I have you come in the control room for a minute?” When he walked in I asked him to take a seat, and I said to him right there “well, you just fucked my shit up!” He was so nervous, and I told him “you’re going to have to join my band now, because there’s now way I could ever do these songs live without having these incredible vocals backing me up!!!!!” And it was done, he was now officially a Nick Moss Band member!

“I remember the first run we did, and he was so nervous because I told him he’d have to play rhythm guitar too, he couldn’t just stand there and sing backgrounds all night! He didn’t really “play” guitar when I met him. He was just, as he put it “fooling” around! I have never seen a more naturally gifted musician than him, he spent hours learning my songs on guitar and asking me questions about playing and devouring music that I had filled up his iPod with! He came out swinging on that first tour, and was an instant hit with fans because of his personality and background vocals! I hadn’t even let him sing a solo song yet! I started to quickly realize I had a “secret weapon” in young Mike, and the time came to unleash him to the world! I started out letting him sing a couple songs a night which went over like gang busters, then eventually a couple songs per set…I knew his talent and charisma was too big to hide so I made the decision to make him the featured vocalist singing most of the night (besides, who was I kidding trying to sing most of the night with that beast next to me!?). Night after night, city after city, state after state and county after country his legend grew, and I stood by and watched in awe and pride of this young hungry man!

“My hope was to play with him for as long as we were both able to, I had no problem letting him be the focal point of the band. I was a spectator just enjoying the unbridled talent and passion of this superstar in the making! I was band leader, but he was the show. I didn’t care, I loved him and it was pure joy watching and listening to him right next to me every night!

“Eventually people started to notice his talent and were starting to ask for his vocal expertise. Ronnie Earl was the first to ask for his talent on his “Fathers Day” release. Michael got rave reviews for that recording. The next came when he was asked to perform at the Chicago Blues Fest for an Otis Rush tribute where he teamed up with Monster Mike Welch. It was shortly after that, they decided to make a record, “Right Place, Right Time”. They both knew they had to tour when they finished recording it, it was too good not to.

“The day I knew was coming, finally arrived and Mike sat me down to tell me he was leaving the band. We both cried, I was angry but I knew he had to go. We finished the year out in sadness and also hope for the future for both of us. His hope for him and Mike Welch, and my Hope hope for the new incarnation of the Nick Moss Band featuring Dennis Gruenling!

“We officially ended our run together on the January 2017 Legendary Blues Cruise. It was a bittersweet run of shows featuring Mike and Dennis, and we ended our last show together on the cruise in an embrace I’ll never forget and he kissed me. 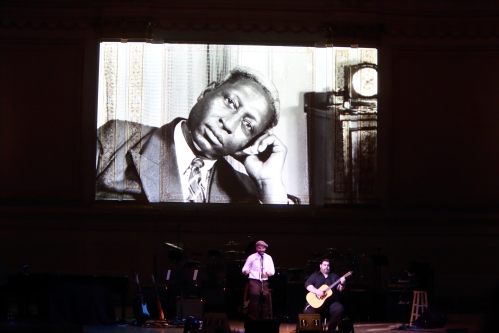 “No non traveling musician or non musician can fully understand what being a band member is really like. The long hours spent together in a van or airplane, in hotel rooms and onstage. The brotherhood, that exists is beyond friendship. We are all we have when we leave the hometown, we are family. To say that Mike was just a band member is a slap in the face to him and me. He was and will always be my brother. I loved him so much.

“When he and Mike Welch won last year at the BMAs I was never more proud of anyone! I told his father “you are his real father, but I feel like the dad who just watched his son score the winning touchdown!” I’ve been nominated now 26 times and I’ve only won once…when Mike got his. 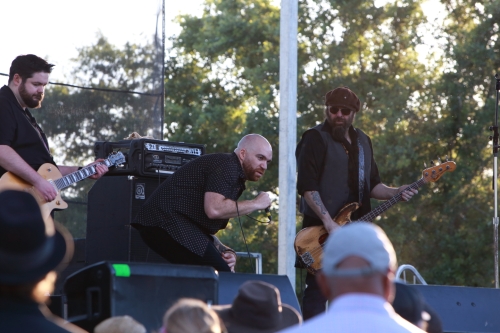 “He was a Comet. He burned so bright. I will miss you and love you forever Mike Ledbetter. I know you are hanging with all the greats, your idols, and I will someday join you for another tune.”

Thank you, Nick, for giving us a peek into a part of Mike that most people never got to see.

← Gangstagrass Blew The Roof Off Hill Country BBQ!
The Summer of 2019 – The 30th Anniversary Of The Lowell Summer Music Series – Starts Well! →